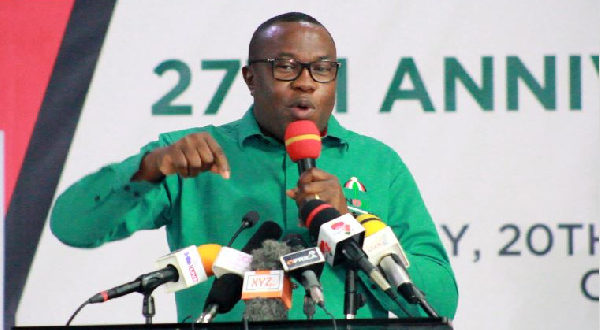 The National Chairman of the opposition National Democratic Congress (NDC), Samuel Ofosu-Ampofo, has finally admitted that the leaked tape which he is currently standing trial in court is his voice, after earlier denying it.

He has finally confessed that, some members of the NDC recorded him during a top-level meeting and sold the tape to the ruling New Patriotic Party (NPP), for which he is being prosecuted.

The embattled Elder of the Church of Pentecost confessed in an interview on Adom TV, where he said that the moves were an attempt by some members of his party to cause his downfall.

He stated that “When people in the NDC want to disgrace you they first tag you as anti-Mahama. My party people recorded me at a meeting held with the leadership of the party and sold it to the NPP who are prosecuting me on that. I have been to court seventy times…”

Elder Ofosu-Ampofo and Anthony Kwaku Boahen, an NDC Communications Officer, are on trial for conspiracy to cause harm after the beleaguered NDC National Chairman threatened to harm EC chairperson, Jean Mensa and some of the individuals.

The accused persons had been captured in an audio recording of the proceedings of a meeting on February 3, 2019, planning a road map of criminal activities targeted at the chairperson of the Electoral Commission (EC) and the chairman of the National Peace Council, among others.

The meeting followed the January 31, 2019, Ayawaso West-Wuogon by-election, which turned violent following a clash between some National Security operatives and supporters of the National Democratic Congress suspected to be vigilantes.

The audio recording was played on some radio stations, and according to the prosecution, the Criminal Investigation Department of the Police Service later intercepted the tape.

The prosecution said Mr. Boahen had confirmed being at the said meeting and confessed on a radio station that the information on the tape was true.

Already the audio recording of the voice of the NDC National Chairman planning a road map of criminal activities targeted at some individuals has been admitted as evidence in Court.

This was after the court had rejected claims by lawyers for the politician that the audio breached the constitutionally guaranteed right to privacy.

A Police Investigator with the Criminal Investigation Department Headquarters Detective Chief Inspector Berko had earlier told the Court that a forensic analysis has been carried out on the tape.

This he revealed was carried out by the Israel Forensic Science Institute. The Institute he revealed compared the leaked tape to another audio obtained from a media organization.

The second audio is said to be a recording of a speech delivered by the NDC Chairman shortly after his interrogation at the CID Headquarters.

Mr Ofosu-Ampofo and Kwaku Boahen, have both denied the offenses and have been granted a GH¢100,000 bail with a surety each. The over 2hrs tape had been played in open court.

A voice is heard in the recording complaining about violence meted out by security operatives during the Ayawaso West Wuogon by-election.

In the said voice he said, “People will start capturing their mothers and fathers and keeping them hostage till they show up”.

“The EC chair, we must wage a relentless war against her. We need to take her to the cleaners.”

It is further heard saying, “We will go after them. We will not go after them face to face. We will target some people to make them feel their lives are in danger.

“We should also not spare the CSOs and religious groups. Especially the peace council chairman. For the first time I will endorse insults”.

Other voices were heard in the tape.

DPP Yvonne Attakora Obuobisa urged the court to accept the recording as evidence for the trial. Lawyers for Mr. Ampofo led by Tony Lithur insisted it breached the privacy rights.

Justice Samuel Asiedu ruled that the audio is relevant to the case.

He also said it meets the exceptions the constitution allows for such a breach of privacy.

Meanwhile, Ofosu-Ampofo who is seeking re-election in the NDC’s upcoming internal elections is facing stiff competition from the party’s General Secretary, Johnson Asiedu Nketiah describing the decision by Asiedu Nketiah to compete for his position as a wrong move.

I'm Adwenpa-Hene |Blogger & Broadcaster Journalist. I am the CEO and manager of this noble website. I publish on Entertainment, Sports, Politics, Lifestyle, and Technology. You can also follow Us on : YouTube Channel - My Ghana Media TV, Facebook - MyghanaMedia TV , Twitter - @MyGhanamedia2 & Instagram - My Ghana Media TV. Email Address: [email protected] Contact Us: 0200818719
@@MyGhanamedia2
Previous Elizabeth Ohene: Four Years Of Unexplained Silence – Latest Anas Video
Next 25-Year-Old Poses Her Life After Her Friend Beats Her To Death