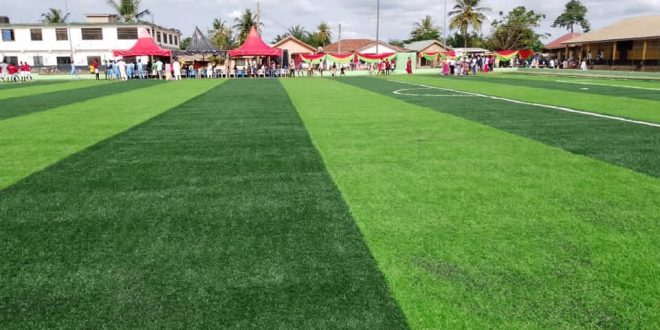 President of the republic of Ghana, H.E Akufo-Addo on Thursday, 7th October, 2021, as part of his 3-day tour of the Eastern Region, inspected the completed Akyem Oda Old Town Zongo Astro Turf

The turf has been built to create a conducive environment for the training and development of sporting talent in Zongo communities.

Commissioning the turf, President Akufo-Addo showed off his soccer skills by kicking a penalty kick but was unable to put the ball past Hon. Alexander Akwasi Acquah, Member of Parliament (MP) for Akyem Oda.

The commissioning of the latest astro turf brings to about more then 50  number of green turfs the Akufo-Addo government has constructed in various communities in the country.

Speaking at the commissioning, President Akufo-Addo   said the impressive development, represented a clear departure of the situation prior to the NPP assuming office in 2017.

“The commissioning of this edifice adds to the remarkable number of modern astro turfs the government of President Nana Addo Dankwa Akufo-Addo has built in various communities across the country in the past 4 years, in fulfilment of the promise to bring modern sports infrastructure to the community, regional and national levels.

“At the regional level, the Akufo-Addo government has built ten multi-purpose stadia in all the ten old regions of the country, and they will soon be commissioned when final the final stage of works are completed. Additionally, government has initiated moves to build 6 more in the 6 newly-created regions to ensure that each region has at least one ultra-modern and multipurpose sports stadium for high-level sports activities.”