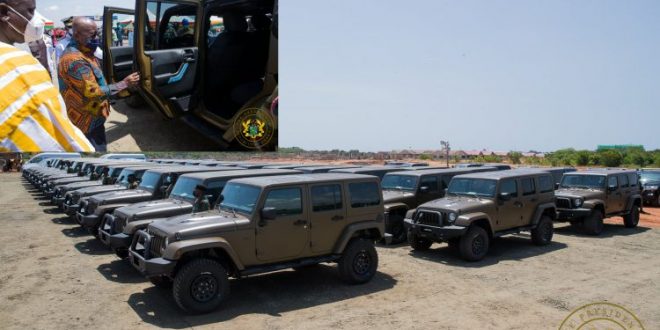 This formed part of the government’s effort to retool the nation’s security agencies.

The latest fleet of vehicles for the Ghana Armed Forces is intended to help secure the northern borders of the country from potential jihadists incursions from Ghana’s northern neighbour, Burkina Faso. 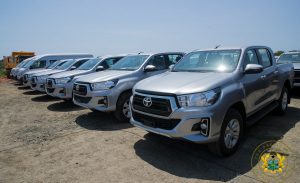 At a commissioning ceremony held at Burma Camp, President Akufo-Addo reiterated the commitment of his administration to ensure that the military is assisted to perform its core function of securing the territorial integrity of Ghana.

The President also cut sod for the commencement of work on the USD $24.8 million dollars housing project for the troops. 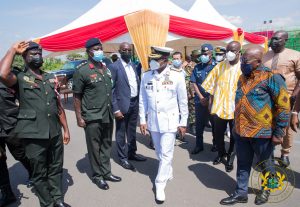 When completed, a total of three hundred and twenty (320) units will be added to the housing stock of the Armed Forces.
Considering the fact that Navy and the Airforce can boost of modern office accommodation for its headquarters staff except the Army, a seven story office complex is under construction for the Army.

The President inspected the xšongoing construction of the seven (7) storey Army headquarters office complex which is progressing steadily.

The project which is costing the taxpayer, GHc33 million cedis is expected to boost the image and morale of the Army. 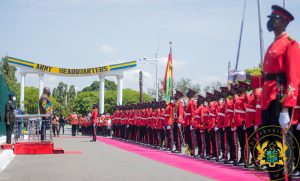 Prior to his visit to Burma Camp, the President did a brief stop at the Ghana Military Academy Training School (MATS) at Teshie to inspect ongoing works to upgrade facilities there.

He expressed delight in the steady progress of the project which he cut sod for commencement on 3th July 2019. 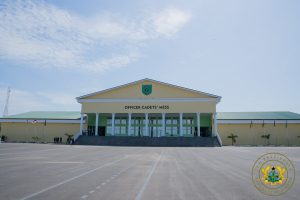 That, he said was because “the Cadet mess, the square and lecturer rooms are completed. The administration block is some 95% complete and the contractor is in the final stages of completing the external works. The 246 capacity Cadet hospital and the commanders block are some 65% complete.” 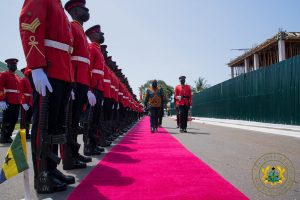 “I am also informed that the housing project which is an integral part of the facility forming the Military Academy upgrade project would see the Ghana Armed Forces adding 832 units of two-bedroom self-contain flats to its stock when completed” President Akufo-Addo added.

I'm Adwenpa-Hene |Blogger & Broadcaster Journalist. I am the CEO and manager of this noble website. I publish on Entertainment, Sports, Politics, Lifestyle, and Technology. You can also follow Us on : YouTube Channel - My Ghana Media TV, Facebook - MyghanaMedia TV , Twitter - @MyGhanamedia2 & Instagram - My Ghana Media TV. Email Address: myghanamedia@gmail.com Contact Us: 0200818719
@@MyGhanamedia2
Previous Government To Punish Employers Who Refuse To Pay Pension For Employees
Next Education Ministry: 27 E-block Contracts Terminated