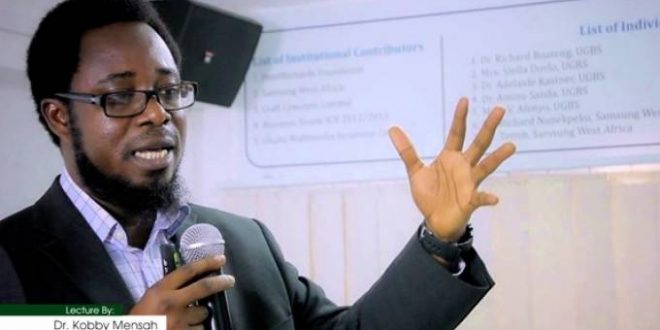 A Political Marketing Strategist and Lecturer at the University of Ghana Business School, Dr Kobby Mensah has said that it is possible for the governing New Patriotic Party (NPP) to break the 8-year cycle.

However, he said, whether or not they will be able to achieve that depends on the conduct of the leadership of the party in the selection process for a presidential candidate.

President Nana Addo Dankwa Akufo-Addo has urged members of the New Patriotic Party (NPP) to embrace internal competition because competitions are part of the political exercise.

He however cautioned the party against unhealthy competition that will hinder the determination of the party to break the 8-year cycle in the next general elections.

Speaking at the NPP’s delegates conference in Kumasi on Sunday December 19, he said “Competition, we cannot avoid competition. Competition there will be but let that competition help the party and not hinder the party so that we can break the 8 in 2024.”

Assessing the NPP’s conference in an article, Dr Mensah said “The party would be best served and properly positioned if its leadership and elders are not seen as partial.

“The calm disposition, discipline and willingness of Alan and the rest of the contenders to respect the rules and orders of the party must be applauded by all. Such dispositions are invaluable political assets that always translates into favorable electoral fortunes.”

Below is his full article…

THE RECENT NPP CONFERENCE: A NEEDLESS ATTEMPT AT DEEPENING DIVISION

The NPP seeks to break the eight year regime tenure cycle in the 2024 General Elections. This is achievable. In Political Science, a practice becomes an institutionalized tradition when it lasts for a minimum of over fifty years. Given that the Fourth Republic is less than thirty years old, the eight-year regime tenure cycle cannot be described as a tradition. Impliedly, the quest to break this cycle is not a utopia.

However, two main factors can make or unmake the realization of this dream. First is the caliber of candidate selected as flag bearer for the party. Second is how the leadership and elders guard against acts and tendencies that deepen the already polarized party. One cardinal feature of every political organization is guaranteed disagreements that have the potency to create schisms and disunity. However, what positions a political party to win its ultimate objective of securing political power is how it handles such acts that create disunity. Given that the party would be seeking to do what has not been done before in the history of the Fourth Republic, how it handles its internal matters in a manner that demonstrate respect for its rules and show equal treatment for all, particularly within the context of a contest is crucial.

In other not to deepen cracks within the party and to ensure that all are focused on the broader agenda of discussing key reform proposals, the party, in the lead up to the recent conference held on Sunday 19th December, 2021 served notice that it would not tolerate any act of campaigning at the venue or around the vicinity of the venue. Posters and bill boards were ordered to be removed and this was complied with. However, organizers of the conference deliberately or inadvertently created a certain platform for the Vice President who is also a contender for the flagbearership of the party. Given him an opportunity to present a lecture was an unfair advantage. The other contenders for the flagbearership of the party have equally important portfolios that they could have presented reports on. In a contest, whoever fails to recognize that such a platform presented to the Vice President could lend itself to various interpretations of uneven playing field may be naïve in politics. How the supporters of Bawumia were allowed to the venue to go cheer him as he presented his paper is a needless violation of the orders of the party that could potentially deepen the cracks. But for the maturity displayed by Alan and the rest of the contenders, there would have been chaos at the Congress. Was there also a deliberate breach of protocol just to shore up the image of Bawumia by allowing him to enter the venue after the President had already taken his seat? These deliberate or inadvertent mistakes cannot be countenanced by any serious political organization that is poised for achieving what is unprecedented.

The party would be best served and properly positioned if its leadership and elders are not seen as partial. The calm disposition, discipline and willingness of Alan and the rest of the contenders to respect the rules and orders of the party must be applauded by all. Such dispositions are invaluable political assets that always translates into favorable electoral fortunes.

I'm Adwenpa-Hene |Blogger & Broadcaster Journalist. I am the CEO and manager of this noble website. I publish on Entertainment, Sports, Politics, Lifestyle, and Technology. You can also follow Us on : YouTube Channel - My Ghana Media TV, Facebook - MyghanaMedia TV , Twitter - @MyGhanamedia2 & Instagram - My Ghana Media TV. Email Address: [email protected] Contact Us: 0200818719
@@MyGhanamedia2
Previous John Mahama To Meet Akufo-Addo “At A Future Date”
Next Hearts of Oak Cancel Contract With Defender Nuru Sulley