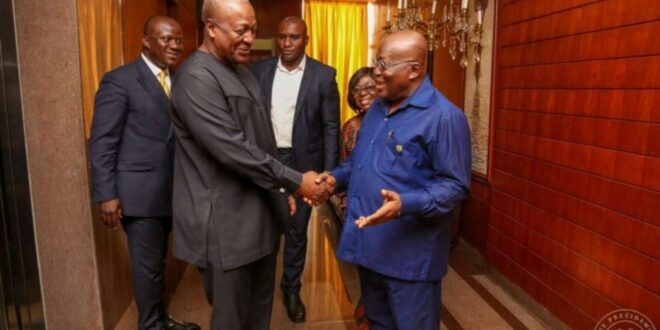 Former Member of Parliament for Ledzokuku, Dr Bernard Okoe Boye, has given the reasons why John Dramani Mahama won in his constituency against President Nana Addo Dankwa Akufo-Addo in the 2020 elections.

The former Deputy Minister of Health who was also defeated by the NDC’s parliamentary candidate, Benjamin Ayiku Narteh, explained that most of the voters in the constituency are traditionally NDC sympathizers who were determined to vote for the main opposition party.

For a candidate of the NPP to win, he said, that person will have to overwork himself to ensure that victory.

“The point I am making is that even in 2016 when there was a wind of change and everybody was calling for change, NDC still won my seat in terms of the presidential. What it tells you is that it is a constituency that they the NDC are strong in.”

“Immediately a presidential candidate wins a particular constituency, it tells you that their party as a brand has an upper hand so for an NPP candidate to win, then the candidate must appeal to maybe, some of the NDC folks or have some other sympathizers.

“What does it tell you? It tells you that if you are a candidate who is contesting on the ticket of the NPP you have a mountain to break. It is like what Amewu did in Volta Region.”

He added: “I don’t believe that former President Mahama had done so well that he deserved to lead close to 9000 especially with the work that Akufo-Addo had done in the last four years. Policies like the free SHS which has affected many families, coupled with the Highways in Ledzokuku, the Teshie Landing beach. President Akufo-Addo has started and completed major projects that the community had wished for over close to 50 years.”

“So, the question is that why is that NDC got that lead? This is the answer.”

There are people who vote in a traditional manner. I know people who said [I] took care of them at the hospital but you know, I am NDC so I still voted for the NDC candidate. To be honest, most people you meet who tell you Doctor gave rice but didn’t give oil, it is not because of the oil.”

“I understand where I am coming, I was born, bread in the constituency, my mother who raised me was strong NDC. When you ask her why are you NDC she eventually tells you this is where they say we belong. To them even when the NDC is performing so badly it is a heritage you must protect. When it is deep-seated like this it takes patience, time to change… The seat can come back.”

I'm Adwenpa-Hene |Blogger & Broadcaster Journalist. I am the CEO and manager of this noble website. I publish on Entertainment, Sports, Politics, Lifestyle, and Technology. You can also follow Us on : YouTube Channel - My Ghana Media TV, Facebook - MyghanaMedia TV , Twitter - @MyGhanamedia2 & Instagram - My Ghana Media TV. Email Address: [email protected] Contact Us: 0200818719
@@MyGhanamedia2
Previous I Am The Best Ever – Says Ex-Ghana Goalkeeper
Next Akufo-Addo Lacks Political Will To Purge And Restructure National Security – Sam George