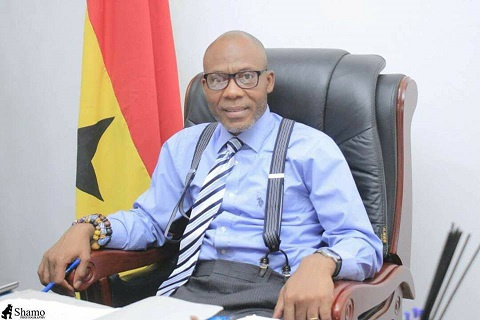 Former Mayor of Tamale in the Northern region, Iddrisu Musah, affectionately called Musah Superior has made his intention known to vie for the New Patriotic Party’s (NPP’s) General Secretary position.

According to him, as a party man, he remains committed to the NPP’s course and will readily avail himself of service whenever he’s needed.

“I have reflected on my contributions to the New Patriotic Party since the days of the Danquah/Busia Club in the 1990s through to the days the Party was formed and launched in July 1992. As a “foundation” member of the party, I have decided to contest for the position of General Secretary in the 2022 National Delegates’ Congress of our great Party,” he declared in a statement released Wednesday, December 15, 2021.

Musah Superior was the Metropolitan Chief Executive (MCE) of the Tamale Metropolitan Assembly in the first term of the administration of President Nana Akufo-Addo.

See also  NPP Flagbearship Slot: “I Believe In Bawumia ; He Can Look After The Country”- Musah Superior Declares

Musah Superior, who is now the Deputy Chief Executive Officer of Forestry Commission believes he has the backing of the rank and file of the party who are yearning for him to contest and win the position.

“My decision to contest for the General Secretary position has been made even stronger by calls from the rank and file of the party on me to serve in that role. As a true, loyal and dedicated member who is desirous in serving the New Patriotic Party in any capacity, I feel obliged to respond positively to
the calls by the numerous party people across the country.

“The government of the New Patriotic Party has performed well, and we must build on the successes chalked by the government as part of our strategy to secure victory in 2024. It is for this reason that I offer myself for the General Secretary position to lead in galvanizing the grassroots to re-build a stronger, thoughtful and more efficient Party capable of energizing and mobilizing first our supporters and sympathizers, and then millions of non-NPP voting citizens across the country to compete meaningfully in the 2024 general elections.”

He believes that the party is losing its identity hence he has the capability to restore the identity and revive dormant party structures.

“The spirit of our Party must be brought back. We must be ready now and at all times to properly plan and execute an efficient and innovative campaign for victory in the 2024 General Elections.

“I have the capacity and the strength to find the lost spirit, revive the dormant party structures across the country, and serve the party people with purpose, greater assertion, and conviction in the mandate I seek,” he added.

He, therefore, declared his intention to travel the length and breadth of the country to interact with the party supporters about his vision. 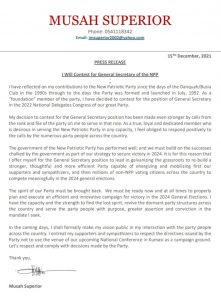 I'm Adwenpa-Hene |Blogger & Broadcaster Journalist. I am the CEO and manager of this noble website. I publish on Entertainment, Sports, Politics, Lifestyle, and Technology. You can also follow Us on : YouTube Channel - My Ghana Media TV, Facebook - MyghanaMedia TV , Twitter - @MyGhanamedia2 & Instagram - My Ghana Media TV. Email Address: [email protected] Contact Us: 0200818719
@@MyGhanamedia2
Previous Price Of Poultry To Go Up By More Than 50% This Year Compared To Last Year
Next Anesthetists, Physician Assistants Appeal For Separation From Medical And Dental Council