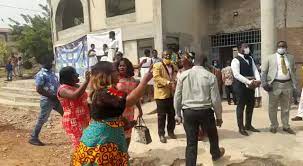 A/R: Fight In Church After Seven Members Get Sacked From Assemblies Of God At Kwadaso [Video]

Church service at Jesus Power Assemblies of God, Hilltop Assembly, Ohwimase in the Kwadaso Municipality turned into a boxing arena following the dismissal of some members on the church’s board.

In a video intercepted by Akoma FM, church members are seen on rampage angrily exchanging words among one another.

Explaining the situation on Akoma FM‘s current affairs and political show GhanAkoma Monday, December 20, Deacon Collins Fosu Kwarteng, who is one of the victims, explained that the church board including regional and district executives are “persecuting” them because the local members have resisted some of the new directives.

He explained to host of the show Aduanaba Kofi Asante Ennin that “they are imposing a new resident pastor on us and we as the local members who will be footing bills and paying salaries of the new pastor prefer a different person to the one imposed on us so they have tagged us as disrespectful hence our dismissal”.

In an official dismissal letter signed by Regional Superintendent Rev Stephen Yaw Manu and dated December 9, 2021, the Assemblies of God Ghana Ashanti West Region wrote to dismiss the seven members with immediate effect with reasons of insubordination and indiscipline towards the leadership of Kwadaso district.

They are not to attend any branch of the church and are to hand over all church properties in their possession to the district pastor with immediate effect.

According to Deacon Collins Fosu Kwarteng, the development started last week Sunday but ended at the police station as the church leadership complained some members have threatened them.

The recent incident appears to be the effect of the dismissal letters handed the members.