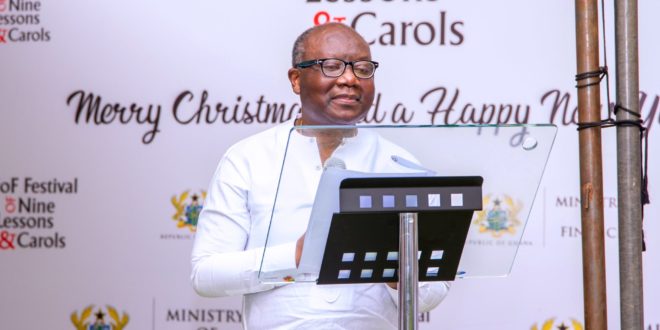 Ken Ofori-Atta: E-Levy Not The Most Egregious Tax

The Minister for Finance,Ken Ofori-Atta says the introduction of the E-Levy by the NPP government is not the most egregious tax ever to be passed in this country.

Ofori-Atta said the introduction of the E-Levy has been necessitated by the country’s quest to develop using its own resources and not through constant borrowings from external sources.

The minister said the country cannot afford to enter into another programme with the International Monetary Fund (IMF) as the restrictions could not help the country’s development at this time.

He was speaking at the government’s town hall meeting on the E-Levy Thursday (27 January) in Koforidua in the Eastern Region.

Disaster in the making

Ofori-Atta said, “This is not the most egregious tax that you could get but it really leads to the issue of inclusion of all of us to build our society and wherever we really want to go to transform this land. And that has been the subject of this debate, the question is; do we want to build the new Jerusalem?”

“People forget what happened when we were in the IMF programme. We couldn’t pay for nurses, teachers, we couldn’t hire any more. We can deal with them for them to give us advice but we need not ever get into an IMF programme”

“…And if you don’t do this E-Levy, you’re just pushing yourself in a way that will potentially end up in such disaster.”

Also speaking at the town hall meeting, Ursula Owusu-Ekuful, the Minister of Communication and Digitisation said the E-Levy is set to help the government improve on revenue generation to develop the country.

“We need to finance our developmental agenda and stop depending on

loans and borrowings from other countries if we are to be truly independent,” Owusu-Ekuful said.

She Ghanaians have no cause to be alarmed as the introduction of the E-Levy will help raised the necessary revenue to support the country’s development adding “E- levy is being introduced at a lower rate of 1.75%. In other countries, digital taxes are being introduced to the tune of 10% and we travel there to seek loans for our development and to borrow.”

“In 2020, the Communication Service Tax (CST) Amendment Act was passed to reduce the rate from 9% to 5%. When the CST was introduced, it faced similar opposition as we are seeing currently and the current Speaker dubbed it as ‘Talk Tax’; as the NDC and the industry, led by the GSMA data claimed it will damage the growth of the telecommunications industry as consumers would change their mobile communication habits. This did not happen; they were unfounded fears,” she added.

See also  GRA : E-Levy Implementation To Start From May 1