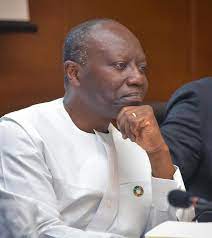 The Finance Minister, Ken Ofori-Atta has given indication to Parliament that the Electronic Transaction Levy Bill may be withdrawn by Friday 11 February.

The bill is expected to be reintroduced on Tuesday 15 February 2022 for consideration, official communication from Parliament said.

According to the business committee of Parliament, the bill will be programmed for consideration during the fourth week of the month.

“Mr Speaker, the Hon. Minister for Finance has given indication after his nationwide engagement with the citizenry on the bill, of the likelihood of the withdrawal of the bill and the reintroduction of same on Friday 11 February 2022 barring any unforeseen circumstances. In the event that, he is unlikely to withdraw and reintroduce the bill on Friday 11 February 2022 he may do so on Tuesday (15 February).

“…After the withdrawal and reintroduction of the bill, the business committee would programme the bill for consideration during the course of the fourth week of this meeting and honourable members are, therefore, encouraged to participate fully in the consideration of the bill for the passing of a good piece of legislation for the benefit of all,” the deputy majority leader Alexander Afenyo-Markin told the House.

Meanwhile, minority chief whip, Mohammed Muntaka Mubarak has raised concerns over the uncertainty regarding the presentation of the bill which he alleges forms part of plans by the majority to spring a surprise on the minority.

“If our colleagues from the majority want us to have certainty, if you’re withdrawing, come and withdraw now and tell us that you’ll come back with the business so that we know that the business is not in the House. But so long as you leave it lingering and using words like ‘likelihood’, ‘unforeseen circumstances, for us in the minority, the only conclusion is that you’re trying to lay ambush on us,” he stated.

We’re not ready to resubmit E-Levy

Joseph Osei-Owusu, the First Deputy Speaker of Parliament, says the government is still conducting stakeholder engagements on the Electronic Transaction Levy (E-Levy) Bill, hence its inability to resubmit the draft legislation before Parliament.

His comments come after the Minority in the House fumed over the Majority’s failure to present the bill in the House this week.

But Osei-Owusu said Parliament’s business committee is working to schedule the debate for the second week of February.

Speaking to Beatrice Adu on The Big Bulletin on Thursday (3 February 2022), the First Deputy Speaker declared: “We are simply not ready [to resubmit the bill to Parliament]. You see that public hearing is ongoing across the country.