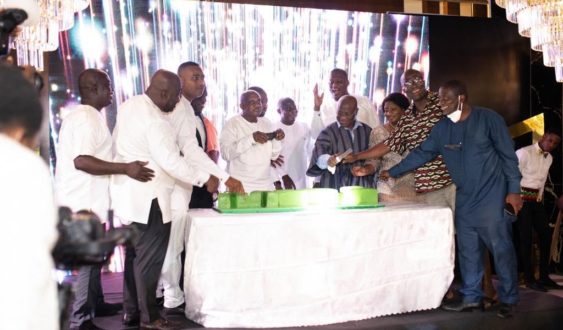 Member of Parliament for Ningo-Prampram, Sam George has dared the Majority Leader, Osei Kyei-Mensah-Bonsu to name the NDC legislator who allegedly gifted him an E-Levy crafted cake.

In videos and pictures widely circulated on the internet from the birthday party of Osei Kyei Mensah Bonsu, a green coloured cake designed to spell the word ‘E-LEVY’ stole the spotlight at the just ended celebration.

The cake was met with severe backlash from social media users who described it as “crass” and “insensitive” considering the overwhelming opposition to the proposed tax which is being pushed through Parliament by the Majority side.

In response, Ranking Member on Roads, Kennedy Nyarko Osei explained that the cake was the handiwork of the Minority group.

In a Facebook post, he stated that the cake was presented by the Minority caucus “to the Majority Leader on behalf of their caucus and kept the pictures all this while and decided to release them ahead of the planned ‘Yentua Demonstration’ to ruffle the feathers of Ghanaians to get them more angry at government.”

However, reacting to the above statement, Sam George says the onus now falls on the Majority Leader to prove the allegation by naming the NDC MP or MPs who gifted him said cake.

“The CDD and ISODEC should be calling out the likes of the Majority Leader, Osei Kyei Mensah Bonsu who at the height of Ghanaians agitation against the E-Levy celebrates his birthday with an E-levy cake. Such insensitivity! And when he’s called out for it, he says that it was somebody in the Minority.

Hon Majority Chief Whip, I dare you to name the Minority MP who got the cake delivered? Face it, your side has been insensitive to d Ghanaian people. Your Boss, d Majority Leader gleefully went to cut d cake and put out pictures of same. Integrity demands you prove your claim.🦁 https://t.co/3ZqGKDh3tc

According to the Ningo-Prampram MP, “That cake was done by himself! It is the insensitivity of those in power, the haughtiness and arrogance of those in power; they think they can do what and whatever they want.

“I am saying who sent the cake to them? I say I am daring him, I am daring Kyei Mensah Bonsu – he’s someone who doesn’t like to be challenged at all and I am daring him. If he has any integrity he should mention the NDC MP who sent it to him.”

He further revealed that no member from the Minority side was invited to the birthday celebration so questioned why the party will go great lengths to offer him a cake.

“We weren’t even invited to the party. Even if it was a gift that he did not agree with, why did he gleefully stand there and cut the cake? Who put out the pictures? Those were official pictures put out by him.

“When his own party base turns on him because even the NPP foot soldiers know that they will feel the pinch of the e-levy because of the waste in the system. You’re bringing in an e-levy when they turn the waste on him then they come out with this impotent lie that it is an NDC MP,” he said.

“Like I said, I am repeating it again. Honourable Osei Kyei Mensah Bonsu, MP for Suame, I’m looking you in the face through the camera, Minister for Parliamentary Affairs and leader of government business I dare you to name the NDC MP who sent you the cake. If you can’t name him in 24 hours the whole country will know that you’re a liar!” he emphasised.