Breaking News
Home / POLITICS / Akufo-Addo Appointed Former MCE For Akuapem North, Dennis Aboagye As Director Of LGD&RD In The Office Of The President 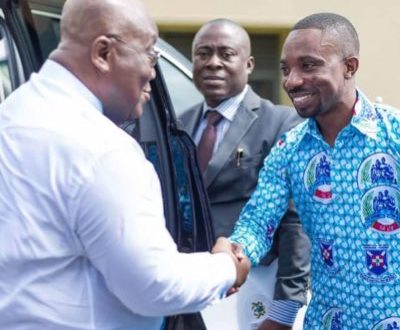 Akufo-Addo Appointed Former MCE For Akuapem North, Dennis Aboagye As Director Of LGD&RD In The Office Of The President

Aboagye, a young and vibrant politician whom many describe as a key asset to the future New Patriotic Party (NPP), was relieved of his role as a municipal chief executive in August 2020. The development came as a shock to many who thought he was on top of his job.

At the time, he told sources that the president had explained he needed him to be in Accra to support the NPP campaign as Election 2020 hotted up. He consented, reasoning that the president had overarching insight into the range of abilities at his disposal, and saying he believed he was needed to support the campaign to ensure the party retained power.
Business and youth focus

In his new role, Aboagye is expected to be seconded to Dan Botwe, the Minister of Local Government, Decentralisation and Rural Development, providing specialist advice and assistance to the minister and ministry to support them to deliver their mandate.

Dennis is a chartered marketer with a postgraduate diploma from the Chartered Institute of Marketing UK and an MBA in marketing from the Central University Graduate School of Business.

He has ten years experience within the sales and marketing industry with exposure in fast-moving consumer goods and financial services.

He has professional experience in a variety of roles within the pensions industry, having worked with Enterprise Trustees Ltd and as a member of the Enterprise Group, starting as a client relations executive, earning promotion to client relationship manager and finally serving as a unit head in charge of client relations.

He set up the first ever youth wing of the New Patriotic Party in Akropong, Eastern Region.
Earning stripes

Admirers give him credit for contributing in many ways to raising the image and brand of the party.

Dennis Edward Aboagye was born and bred in Larteh Akuapem in the Eastern Region of Ghana. He began his basic schooling at the Larteh Presby Primary and completed it at Swedru International School (SWIS), where he sat his Basic Education Certificate Examination (BECE). He studied for his SSCE at Okuapeman School in Akropong.

Dennis proceeded to University of Ghana Legon, where he earned a Bachelor of Arts degree in political science.

He is a devout Christian and is married with three beautiful children.