The Ghana National Fire Service says it is saddened by the unfortunate accident involving five of its officers while they were responding to a fire incident.

Four of the fire officers were left in critical condition after a motorcycle and the fire tender they were travelling on collided at a section of the Kwame Danso-Atebubu road in the Bono East Region on Tuesday.

One person, the pillion rider, is reported to have died in the accident.

The Atebubu-Amantin Divisional Police commander, ACP Samuel Alordey, in narrating the incident  said, “on the way coming to the hospital where the fire alarm was sounded, they got involved in an accident. The car knocked down a motor rider with a pillion rider. The pillion rider died. The car summersaulted several times and landed upside down. It is damaged beyond repairs.”

A statement released by the Ghana National Fire Service said the Chief Fire Officer was deeply saddened by the incident and gave assurances of giving the victims the best medical attention.

The release also said the Ghana National Fire Service Council and the Interior Minister had put in place plans to airlift the affected fire fighters to Accra for further medical attention.

“Management wishes once again to assure the entire personnel of the Service and the public that, the safety of firemen remains the ultimate priority and we will continue to ensure a safe and conducive working environment for all personnel,” the statement added.

Read the statement released by the Ghana National Fire Service below: 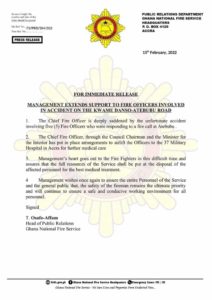 I'm Adwenpa-Hene |Blogger & Broadcaster Journalist. I am the CEO and manager of this noble website. I publish on Entertainment, Sports, Politics, Lifestyle, and Technology. You can also follow Us on : YouTube Channel - My Ghana Media TV, Facebook - MyghanaMedia TV , Twitter - @MyGhanamedia2 & Instagram - My Ghana Media TV. Email Address: [email protected] Contact Us: 0200818719
@@MyGhanamedia2
Previous Akufo-Addo Appointed Former MCE For Akuapem North, Dennis Aboagye As Director Of LGD&RD In The Office Of The President
Next Akufo-Addo Is Not Using Private Jet For Fun – Kwadaso MP To Ablakwa