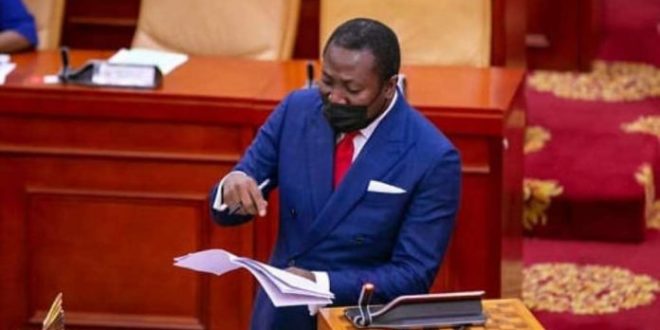 The Majority in Parliament is accusing the Minority of bad faith with its motion for a vote of censure on the Minister of Health, Kwaku Agyeman Manu.

The house after months of delay finally adopted the report of the Ad-hoc committee set up to probe the botched Sputnik-V deal.

But the Minority earlier today, Wednesday, February 16, 2022, filed the motion backed by 137 signatories to push for the removal of the Minister of Health over his ‘dishonest’ role in the Sputnik-V vaccines procurement scandal.

Addressing the press in parliament, however, Deputy Majority Leader, Alexander Afenyo Markin, said the action by the Minority is surprising especially when the country has moved on after the findings by the parliamentary committee that probed the deal was unanimously agreed on by the two sides.

“Our colleagues with us had agreed with us that we need to move on as a county and that the report by itself was by consensus. So today at the plenary, we adopted the Sputnik-V report as a house by consensus and I think it’s good for the country.”

“So we thought that we have dealt with this issue of Sputnik-V, but we are hearing that some attempts are being made to bring a motion of censure against the Health Minister. We will be surprised to see that happening on the floor of the house because it will amount to serious bad faith. That notwithstanding, we wait to see, but we have approved the report at the plenary by consensus just as the committee at itself arrived at with its findings and recommendations.”

In a memo to the Speaker of Parliament calling for a vote of censure, the Minority said his actions were a “direct breach of the Constitution and Laws passed by this Honourable House.”

Outlining Mr. Agyemang-Manu’s failings in the six-point memo, they said the minister was guilty of perjury, among others, when he “misrepresented to the Ad Hoc Committee on Oaths that no payment was made under the agreement to the Private Office of His Highness Shiek Ahmed Dalmook Al Maktoum [the Dubai-based businessman the Ministry of Health contacted for the procurement].”