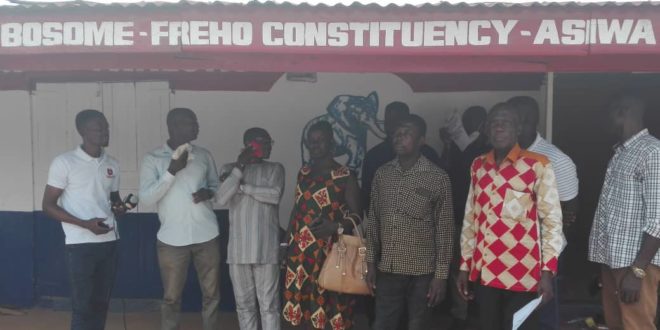 Bosome Freho: “I Will Preside Over A Peaceful And Violent-Free Elections” – NPP Constituency Chairman Assures.

The Constituency Elections Committee of the Bosome Freho constituency in the Ashanti Region, have met to assure party people and the general public to ensuring a peaceful and violent-free elections in the upcoming internal party elections.

Led by its chairman, Mr. Bonah, who stated that everything is set to preside over a free, fair and credible elections. He further revealed that preparations are far advanced for the release of nomination forms to prospective candidates to contest at the polling station level.

He made this known when the Inter-Party Dialogue Committee (IPDC) held its maiden meeting to institute measures for the elections. The meeting which was held on Friday saw the member of parliament, constituency executives and other party people in the constituency.

Speaking to the media, the constituency chairman who doubles as the chairman for the elections committee, Frank Aboagye Bonna indicated that the decision is to serve as a reference to promote good and healthy politics.

Meanwhile, the member of parliament for Bosome Freho constituency, Hon. Akwasi Darko Boateng mentioned that all qualified party members must be allowed to pick forms in the various polling stations and contest in a free, fair and credible elections.

I'm Adwenpa-Hene |Blogger & Broadcaster Journalist. I am the CEO and manager of this noble website. I publish on Entertainment, Sports, Politics, Lifestyle, and Technology. You can also follow Us on : YouTube Channel - My Ghana Media TV, Facebook - MyghanaMedia TV , Twitter - @MyGhanamedia2 & Instagram - My Ghana Media TV. Email Address: [email protected] Contact Us: 0200818719
@@MyGhanamedia2
Previous We Are Not Returning To The Classroom On Monday – UTAG President
Next Gov’t Is Not Appointing Headmasters For Schools – MoE Denies NAGRAT’s Claim