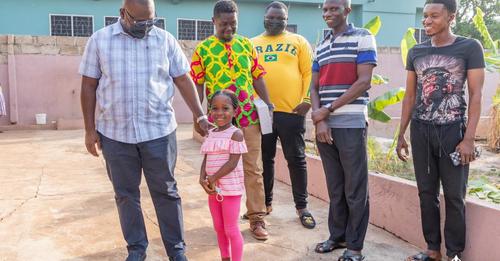 Minister for Works and Housing and Member of Parliament for Bantama, Hon Francis Asenso-Boakye has paid a visit to an eight-year old girl who in a viral video, has chastised him, the New Patriotic Party(NPP) and President Akufo-Addo for being stingy because they have not financed her schooling after she did a video campaigning for the party in the run-up to the 2020 election.

The young girl in the video said during the 2020 election campaign period, she did a video with which she campaigned for the now Minister for Works and Housing and Member of Parliament for Bantama, Hon Francis Asenso- Boakye and President Nana Addo Dankwa Akufo-Addo, which went far on various online platforms.

According to her, after winning the election, the NPP government and President Nana Addo have not done anything for her as would have been done if it were the National Democratic Congress (NDC) and John Dramani Mahama, who would have been catering for her schooling and family by now.

In the latest video, a voice that sounds feminine asked the Primary Two girl, Adobea, what she is saying Akufo-Addo has done to her.

In her response, the young girl said “Ɛɛmm Asenso-Boakye, when I did a big campaign(for him) it went viral. They didn’t look for me ooo. If it were NDC, John Mahama, he would have been taking care of my schooling, and would have even extended the care to my family.

They (NPP) have worn POP on their hands(stingy). When they get up, all they know is Fellow Ghanaians, Follow what and what; big English. Fix the country, Fix the country, has he(Nana Addo) not heard it”?

Upon watching this viral video, Hon Francis Asenso-Boakye who should have been angered about it, rather searched for the whereabouts of Adobea and visited her on Friday 18th February, 2022.

The visit to the 8-year old girl and her parents at Abrepo in the Bantama Constituency, was to thank the young girl for the supposed video she did in 2020 to support the campaign of the NPP.

Speaking in the presence of Adobea, her parents, other family members and cotenants, Mr. Asenso-Boakye, on behalf of the President Nana Addo Dankwa Akufo-Addo and the NPP thanked the the Basic Two pupil for the campaign she did for them during the 2020 election period.

He was happy for the girl’s gift of eloquence and boldness in communicating. However, suspecting that the small girl must have been led to say the sort things she said in the viral video, the Bantama MP advised the parents to guard against pushing the minor into anything political, since it could affect her life in future.

He counseled other parents, guardians, and caretakers of children to eschew all sorts of attempts to cause children into doing partisan politics.

To Adobea, Francis Asenso-Boakye informed her that President Akufo-Addo is already catering for her schooling as his government has put in place good measures and policies making basic and Senior High School education free for all pupils and students in public schools.

The former deputy Chief of Staff presented a brand new tablet and an undisclosed amount of money to Adobea.

He encouraged her to learn hard in school and be obedient to her parents.

Parents of Adobea, Mr. Kwabena Addo and Madam Akosua Serwaa praised Hon. Francis Asenso-Boakye for visiting them and gifting their ward, Adobea, with the tablet.

Mr. Addo and his wife pleaded with Hon. Asenso-Boakye and President Nana Addo to forgive them and their daughter, Adobea for the vial video which might have hurt them and their party.

They explained that they did not know about the video until they saw it on online platforms at which time they could do nothing about it.

They thanked their MP and the President for their patience and love towards the girl when the duo were supposed to be angry with her and or her family.

Adobea’s parents opined that it would be ungrateful for any Ghanaian to criticize President Nana Addo when all eyes can testify that he is performing incredibly well.

Little Adobea thanked the Bantama MP for donating the tablet and money to her. She prayed, like pastors do for their church members, for Mr. Asenso-Boakye and charged politicians to unite to make the country develop.