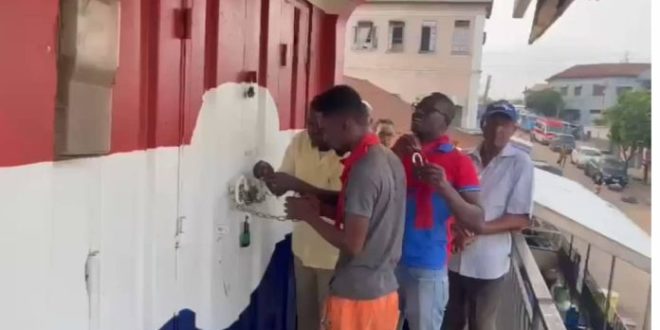 The New Patriotic Party’s (NPP) office in the Subin Constituency in Kumasi has been locked up by some disgruntled members of the party.

The group alleges that some members who picked forms to contest for various positions in the party at the polling station level have been disqualified. They further accused the MP of the area, Eugene Boakye Antwi of circumventing the electoral rules to favour himself and his assigns, a situation they have vowed to resist.

Clad in red bands the disgruntled members marched to the party office and locked it up as they chanted war songs.

One of the members said: “Two years ago we took our MP to court on a similar issue when he fraudulently suspended us from the party, which we won. This same MP wants to take revenge on us this time. A chunk of us have been disqualified and we see this as an attempt to frustrate the electoral process.”

“This is unacceptable. The MP is running the party like the era of Nebuchadnezzar and today’s Putin. I am a card-bearing member of this party and I was told I don’t qualify. In some instances, the vetting committee used E-levy to disqualify us and this tells us the MP is using the divide and rule approach to make his way and we will resist it”, another said.

See also  John Boadu: NDC Will Never Scrap E-levy Even If They Regain Power In 2081

The members are calling on the top hierarchy to resolve the issue to avert any tensions.

With the mass agitations and lawsuits within the NPP in the Ashanti Region, political watchers have said the development could spell doom for the party as it seeks to organize its base.

Ashanti Regional Organizer Francis Adomako in an interview with Accra-based Asaase Radio wants the aggrieved party members to remain calm, as it takes steps to resolve the all outstanding issues.