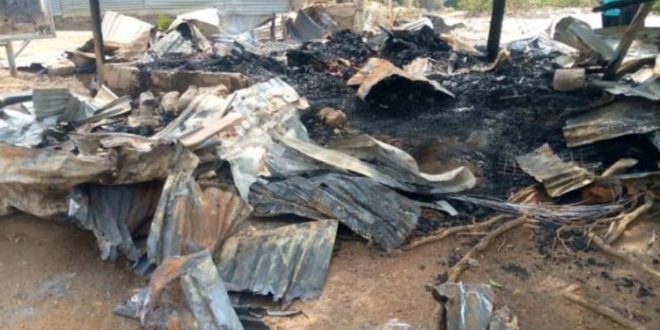 A couple has reportedly been burnt to death at Gyinase in the Asokwa Municipality of the Ashanti Region Friday dawn.

The deceased, Godfred Afenyo, 57, an electrician, and Happy Danso, 47, a petty trader, were said to be fast asleep in the wooden structure they used as place of abode when it was gutted by the fire.

Police have since conveyed the charred bodies to the morgue for preservation and autopsies.

Son of the deceased, Kingsley Asante told an Accra based radio station that the incident happened around 1am on Friday.

“It was late in the night when I received a call from a friend. I decided not to answer, but the call came in several times, so I answered. When I picked, my friend broke the news to me. I took it as a dream because it was weird news. In my doubt, I received another call from my younger brother confirming my friend’s report.

“I told a friend that seeing my father this way is a bad omen. Here we are with this news, it is very unfortunate and unexpected.”

The Ashanti Regional Public Relations Officer of the Ghana National Fire Service, DO III Peter Addai said the fire razed down the wooden structure when they arrived at the scene at about 2:10 am.

According to him, the bodies were burnt before their arrival.

He said they have initiated investigation to establish the cause of the fire.

I'm Adwenpa-Hene |Blogger & Broadcaster Journalist. I am the CEO and manager of this noble website. I publish on Entertainment, Sports, Politics, Lifestyle, and Technology. You can also follow Us on : YouTube Channel - My Ghana Media TV, Facebook - MyghanaMedia TV , Twitter - @MyGhanamedia2 & Instagram - My Ghana Media TV. Email Address: [email protected] Contact Us: 0200818719
@@MyGhanamedia2
Previous Display Of Ghana Flag On Burj Khalifa Was Free – GIPC
Next Kojo Bonsu Can Never Be The Flagbearer Of NDC – Former Ashanti Regional Minister Says