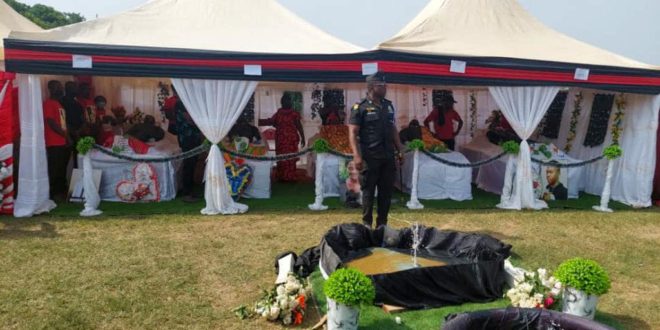 A final burial service has been held today, March 11, 2022 at the Appiatse Park in the Prestea-Huni Valley Municipal Assembly of the Western Region for six victims of the deadly gas explosion in Appiatse.

The explosion, which occurred on on Thursday, January 20, 2022, near Bogoso, claimed 13 lives leaving 59 others severely injured, including a 15-month-old baby.

Out of the number, some of the victims have already been laid to rest.

Some of the victims identified have since been buried.

On Friday, March 11, a mass burial was held for six of the remaining victims including 15-month-old Ella Baidoo.

The others laid to rest alongside the toddler were Ekua Nyame, 80, Justice Kwesi Takwa, 21, Emmanuel Quainoo, 29, Isaac Benyin, 45, and Michael Afriyie, 19.

Thirty-five-year-old Isaac Anane, whose remains were part of the funeral, was taken to Dumase on the Bogoso-Prestea Road for burial.

Four were buried last weekend while two are expected to be sent to their hometowns for burial.

A thanksgiving service will be held on Sunday, March 13 just before the final funeral service is held.

I'm Adwenpa-Hene |Blogger & Broadcaster Journalist. I am the CEO and manager of this noble website. I publish on Entertainment, Sports, Politics, Lifestyle, and Technology. You can also follow Us on : YouTube Channel - My Ghana Media TV, Facebook - MyghanaMedia TV , Twitter - @MyGhanamedia2 & Instagram - My Ghana Media TV. Email Address: [email protected] Contact Us: 0200818719
@@MyGhanamedia2
Previous Kojo Bonsu Can Never Be The Flagbearer Of NDC – Former Ashanti Regional Minister Says
Next US Gov’t Issues Security Alert To Its Citizens In Ghana: Beware Of Kidnapping Activities