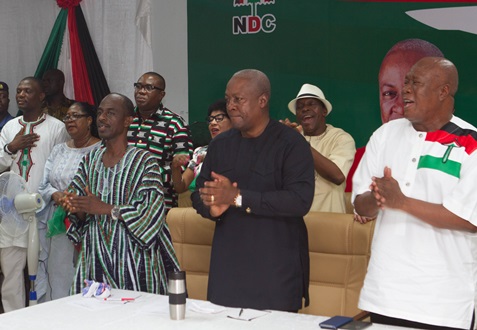 The National Democratic Congress (NDC) has denied harbouring any intentions to stage a coup d’etat.

The National Chairman of the NDC, Samuel Ofosu-Ampofo has assured that the party and its members are democrats, hence would avoid any action that undermines the 1992 Constitution.

Recently, the Dean of the University of Ghana School of Law, Prof. Raymond Atuguba during a lecture in Accra, expressed concern about Ghana’s current financial state as a threat to its democracy.

“We do not want a coup in this country. Yet, I fear that if we do not act quickly, we may have one on our hands very soon,” he said.

The Professor of law has since been severely criticised for his comments deemed as creating a fertile ground for a military takeover of the government.

But speaking to supporters of the party in America over the weekend, Mr. Samuel Ofosu-Ampofo emphasised that the party has no such intentions.

Rather, Samuel Ofosu Ampofo noted that the NDC would employ the democratic process of electing a new government to register its displeasure with the kind of governance Ghanaians are expereincing.

“So we are not interested in coup d’etat, we are interested in using the democratic process of using the thumb of the people to remove Nana Akufo-Addo and incompetent Bawumia from office and form the new government,” he added.

Meanwhile, President Akufo-Addo while speaking at the 65th Independence Day parade in Cape Coast, assured that his government will fiercely resist any coup attempts.

“The great majority of us who are committed to democratic values and institutions will continue to resist the claims of these adventurers and deploy all legitimate means in our democracy to maintain our free open system of governance which has respect for human rights, the rule of law and the principles of democratic accountability.

“Let us guard jealously the peace and stability we are enjoying. There are some restless spirits amongst us who, seeking to exploit the current difficulties confronting the nation, claim to have lost confidence in our democratic system,’ the President said.

Currently, Lead Convener for #Fixthecountry Movement, Oliver Barker-Vormawor together with one other person are standing trial for treason-related offences.

See also  NPP MP To Akufo Addo: Suspend Free SHS, NABCO And Other Social Intervention Programmes In These Difficult Times
Source: myjoyonline.com
Disclaimer: MyGhanaMedia is not responsible for this report and its content. There are four types of content published on MyGhanaMedia daily: curated content; syndicated content; user-generated content; and original content.

I'm Adwenpa-Hene |Blogger & Broadcaster Journalist. I am the CEO and manager of this noble website. I publish on Entertainment, Sports, Politics, Lifestyle, and Technology. You can also follow Us on : YouTube Channel - My Ghana Media TV, Facebook - MyghanaMedia TV , Twitter - @MyGhanamedia2 & Instagram - My Ghana Media TV. Email Address: [email protected] Contact Us: 0200818719
@@MyGhanamedia2
Previous Audio: I Have Not Abandoned The Economy – Dr. Bawumia Responds To Critics
Next Nollywood Actor, Mr Ibu Poisoned At An Event