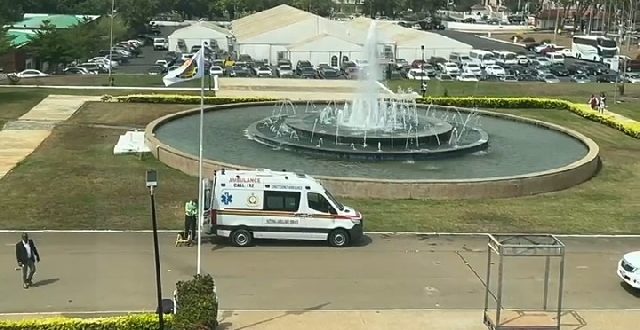 Video: Gravely Ill Chieftaincy Minister, Kojo Kum Ferried To Parliament In An Ambulance To Assist In passing Of E-Levy

Ambulance in Parliament on Tuesday, March 29 has raised suspicions that bedridden Minister for Chieftaincy and Religious Affairs and MP for Ahanta West, Ebenezer Kojo may have been brought in to help the Majority pass the E-Levy.

A former deputy minister of communications, Mr Felix Kwakye Ofosu, has wondered if the governing New Patriotic Party (NPP), in its attempt to pass the e-levy, would haul one of its MPs, Mr Ebenezer Kojo Kum, who has been bedridden for some time now, to the floor of parliament, to vote on the bill.

Surely the NPP do not intend to drag the ailing Chieftaincy Minister to Parliament against all reason and decency,to vote in favour of the e Levy,do they?

Which family would allow their loved one to be subjected to this kind of humiliation in a such a state?

Watch the video below for more details

The Ahanta West MP, who is also the Minister of Chieftaincy and Religious Affairs, was rumoured dead a few weeks ago, prompting a rebuttal from his family.

However, his brother, Nana Mensah Kumah III, denied the rumour but admitted he was not well.

In an audio message available, Nana Mensah Kumah III said: “My brother is not dead; he is alive. I can confirm my brother has been sick and was admitted but he has been discharged and receiving treatment at home.”

“He is not dead; my brother is alive,” Nana Mensah Kumah III stressed.

He asked for prayers for his brother to get well and cautioned those spreading such falsehood to desist from it.

Commenting on the e-levy bill, which was moved by Finance Minister Ken Ofori-Atta on Tuesday, 29 March 2022 for consideration and debate, Mr Ofosu Kwakye wrote on Facebook: “Surely the NPP do not intend to drag the ailing Chieftaincy Minister to Parliament against all reason and decency, to vote in favour of the e-levy, do they?”

“Which family would allow their loved one to be subjected to this kind of humiliation in such a state?”

I'm Adwenpa-Hene |Blogger & Broadcaster Journalist. I am the CEO and manager of this noble website. I publish on Entertainment, Sports, Politics, Lifestyle, and Technology. You can also follow Us on : YouTube Channel - My Ghana Media TV, Facebook - MyghanaMedia TV , Twitter - @MyGhanamedia2 & Instagram - My Ghana Media TV. Email Address: [email protected] Contact Us: 0200818719
@@MyGhanamedia2
Previous Minority Boycotts Consideration Of E-levy In Parliament
Next E-Levy Passed By Parliament After Minority Walkout