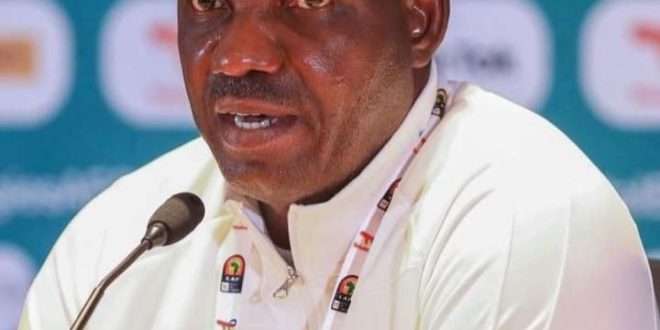 The erstwhile Technical Adviser and Head Coach  of Nigeria’s Super Eagles, Augustine Eguavoen, has resigned from his post.

This comes after Nigeria were denied a place at Qatar 2022, by Ghana’s Black Stars in the final playoff round.

Eguavoen took charge of the Super Eagles before AFCON 2021, after former coach, Gernot Rohr, was sacked due to unsatisfactory performances during the first round of FIFA World Cup qualifiers.

The former Super Eagles full back, Eguavoen, initially stepped down after Nigeria’s Round 16 exit at the AFCON in Cameroon, but was rehired to take charge of the final playoff round against Ghana.

Nigeria were eliminated by virtue of the away goal rule after drawing 1-1 at home in the return leg, with the first leg in Ghana ending goalless.

He has stated that he will now return to his former position as the Technical Director of the NFF.

The Super Eagles we’re hoping to qualify for their fourth straight World Cup finals, before defeat to Ghana.

Read the full statement by Nigeria Football Federation (NFF) below

Following the failure of the Super Eagles of Nigeria to qualify for the 2022 FIFA World Cup, the erstwhile Technical Adviser, Augustine Eguavoen has stepped down from that position with immediate effect.

The NFF has in the meantime withdrawn the two-and-half years contract offered the coaches and terminated the appointment of the entire technical crew of the team with immediate effect. A new crew will be announced after a proper review to lead the new charge of reinvigorating the Super Eagles to face future challenges appropriately.

“We thank the coaches and team officials for their service to the nation and wish them success in their future endeavours,” said NFF General Secretary, Dr Mohammed Sanusi.