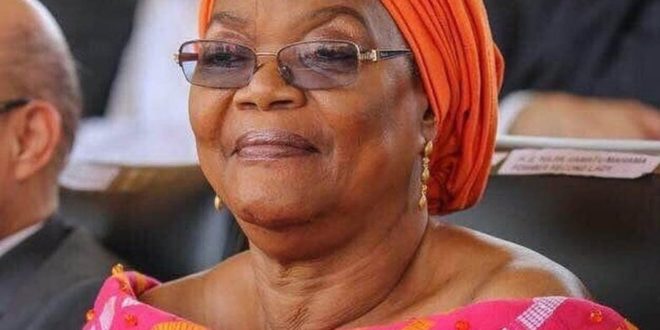 Hajia Ramatu Mahama, the wife of the late Vice President of Ghana under John Agyekum Kufour’s administration, Alhaji Aliu Mahama, is dead, according to a post on official twitter page of the vice president’s wife, Samira Bawumia and a source close to the family have also confirmed.

She died at the Korle Bu Teaching Hospital in Accra on Thursday afternoon after she was admitted on Monday.

I am sad to learn about the passing of Former Second Lady Hajia Ramatu Aliu Mahama. Hajia was a mother to all and will be fondly remembered.

Family members are in a meeting to plan to inform the government of the decision for her funeral in line with Islamic traditions.

Following the meeting and information to the government funeral plans will be revealed by the state and family.

The Vice President of Ghana, Dr. Mahamdu Bawumia, was among several high-profile visitors to her hospital ward on Wednesday after he was informed of her sudden illness.

She sadly passed away while on admission at Ghana’s leading hospital on Thursday with her children and relatives close to her.

Hajia Ramatu Mahama [Neè Egala] had been battling a heart-related sickness for about two years now and was taken to the United Kingdom for treatment last year.

During her stay in the hospital in London reports emerged of her death which prompted her son and Member of Parliament for Yendi, Farouk Mahama to issue a statement denying the reports.

She returned to the country four months ago with several family members meeting her on arrival but her condition is said to have worsened this week which led to her admission at the Korle Bu Teaching Hospital.

In line with the Islamic traditions, quick plans must be made for interment but because she is a former Second Lady, the government will be keen on playing a role in her funeral.

The late wife of the former Vice President was an educationist in Tamale.

Due to her love and care for her pupils, she earned the coveted title ‘Mma Ramatu’ or ‘Mother Ramatu’.

Hajia Ramatu Mahama was the daughter of the late Imoro Egala, a Minister for Trade and Industry and first black chairman of COCOBOD, in the first Republic and a long-standing political stalwart in Ghana through to the third Republic; doubling as a founder of the PNP now PNC.