Breaking News
Home / GENERAL NEWS / ‘I Had Faith; My Election Victories Confirm That With God, All Things Are Possible’- President Akufo – Addo 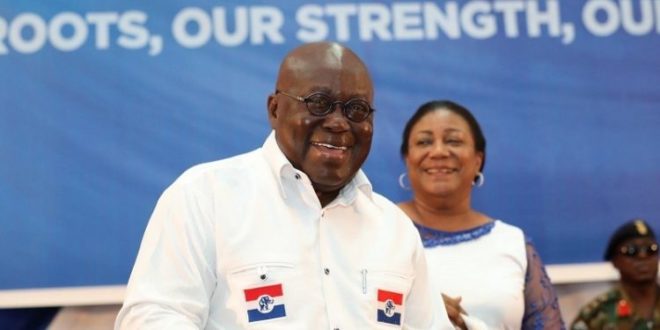 ‘I Had Faith; My Election Victories Confirm That With God, All Things Are Possible’- President Akufo – Addo

The President of Ghana, Nana Addo Dankwa Akufo-Addo has said that for him, nothing depicts more the popular bible scripture, ‘With God all things are possible’ than his election victory in 2016, and subsequent re-election in 2020.

He said when political opponents ridiculed him of not having what it takes to become Ghana’s President, his Christian faith and belief kept him strong for the battle.

While drawing biblical lessons from the Gospel according to St. Mattew 19: 26, Nana Addo, who won the elections on the ticket of the governing New Patriotic Party (NPP) after two earlier defeats said the victories were the Lord’s doing.

“My experiences have been a testimony in my view, of God’s love and the vindication of the words of our Lord and Savior Jesus Christ. The story of the struggles to become the President of my country alone shows [the scripture] that says, With man this is impossible; but with God all things are possible”, Akufo-Addo extolled.

The President was speaking in Washingtion DC, USA, while delivering the inaugural Africa lecture at the Museum of the Bible.

“It took three tries between 2006 and 2016 for me to get elected by which time, the popular catch phrases of “Akufo-Addo cannot be President’, ‘God does not want Akufo-Addo to be President”, Akufo-Addo is short, he does not have the stature to be President had become so confident, I had to be firmly rooted in my faith and have the courage to persist.”

President Akufo-Addo revealed how his popular “The Battle is the Lord” political mantra came about.

“I committed that third election to God and indicated to the Ghanaian people that the Battle is the Lord’s. By God’s grace, I won a famous victory against an incumbent President by a gap of nearly a million vote. The largest of a margin of victory for two decades. By the same grace, I won a re-election in the December 2020 election and I am now in my second and last term as President.”

Nana Akufo-Addo mentioned that his faith in God as a Christian has also shaped his professional life as a lawyer and politician which has heavily influenced his vision for Ghana and Africa’s transformation.

“In my own life as an adult whether as a lawyer or politician, I have always tried not to lose sight of the fact that my Christian faith should be an integral part of the practice of my chosen profession. In the public minds, being a lawyer can pose dilemmas that might be difficult to reconcile with being a Christian.”