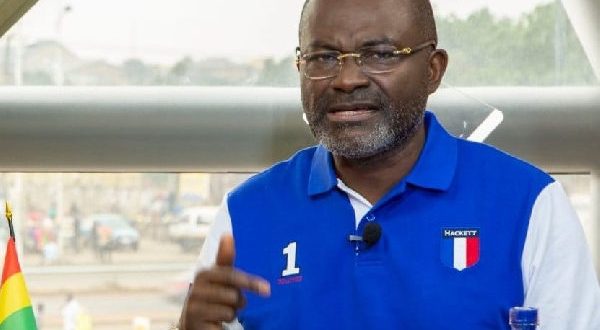 Video: “If Am Supporting Alan, Is Alan Not A Human Being” – Kennedy Agyapong Blasts NPP Executives

The Assin Central constituency’s Member of Parliament and NPP firebrand,  Hon. Kennedy Ohene Aggyapong was visibly angry over seeming attacks by some individuals in the party accusing him of supporting Alan Kyerematen.

He angrily explained that after promising to support every constituency with GHC10,000 for the constituency elections, some bigwigs in the party attacked him for pursuing the agenda of Alan Kyerematen.

He furiously replied, “If am supporting Alan is Alan, not a human being?… at the right time we will speak to the grassroots people… I will not do general donations again, I will select those I want and support them”.

It also appears the Member of Parliament for Assin Central, Kennedy Ohene Agyapong is lacing his boots to contest the next Presidential Primary of the ruling New Patriotic Party.

Even though he hasn’t officially declared his stance, he appears to have dropped the hint on his radio station.

Appearing on Oman Fm’s Boiling Point on Thursday, he said ‘’when the time comes, I am waiting for anybody in the party who will tell me to step down. They will see”.

Kennedy Agyapong hinted plans to join the Presidential race of the ruling party, for the 2024 general election.

The NPP Presidential race is being keenly contested by the Trade Minister, Alan Kwadwo Kyerematen and the Vice President Dr. Mahamudu Bawumia, with Agriculture Minister, Dr. Owusu Afriyie Akoto among others pretending to be in the race.