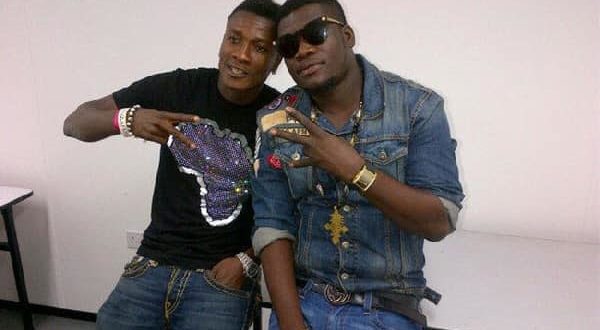 Asamoah Gyan Writes On Ghanaian Musician Castro’s Disappearance; Visiting A Shrine In Search Of His Friend

For the first time in black and white, a detailed account of how  Ghanaian hiplife recording artist and musician, Theophilus Tagoe, popularly known as Castro or Castro Under Fire disappeared has been told by Asamoah Gyan.

‘LeGyanDary’, the autobiography of the former Ghana captain, Asamoah Gyan has hit the bookshelves this month after a star-studded launch led by the President of Ghana, Nana Akufo-Addo at the weekend.

Joy Sports, in collaboration with King-Dawie Publishers, has been serialising interesting portions of the book.

In one of the most captivating parts of the story, Gyan gives a blow-by-blow account of how his prolific musician friend mysteriously disappeared at a beach resort – and the frantic attempts to find him, including going to a nearby shrine.

Read the full extraction of the story here:

“As they left, I was confident of finding him somewhere doing his own thing. That was the only glimmer of hope I could give myself. Anim-Addo joined them and the other fellow mounted a jet ski. We continued our game though I was a bit distracted. Thirty minutes later, they all returned with the same news that they couldn’t find him.

During the wait, Baffour was fuming. He was pretty flabbergasted at how Castro had simply refused to listen and was waiting to lambast him. He kept pacing and murmuring. I knew my brother.

He felt disrespected by Castro’s actions, and he was going to tell him in no uncertain terms to never repeat that. When the news reached us, my brother was outraged. His incessant outbursts were drawing attention and I had to calm him down. I explained to him that this wasn’t the best place to create such a scene and that when we finally find him, we will have a chat with him about it. I recall Sammy tearing up when they informed us he was nowhere to be found.I had to calm Sammy down, so he doesn’t draw too much attention. There were a lot of fans around, and it would be disastrous to even let any of them suspect what we were all suspecting. We decided to go out and search again. This time, we had an expert join the team. He was an expatriate who worked with the hotel. The wait was incredibly long. I am sure they were gone for just about thirty minutes, but it felt like forever. We were all huddled in silence with a little chat occasionally.

In those moments, my imaginations would run wild, and I will quickly dismiss any negative thoughts. The silence was deafening at a point and I whispered a silent prayer to God. When the search party returned, they came along with the key to his jet ski. My heart skipped a beat, maybe two or three more.

The looks on the faces of the search party got me worried. They all had this look of morbid fear in their eyes. That got me even more worried. I mean, if the experts looked this perturbed and helpless, then something must be very wrong somewhere. I started asking questions, and then he revealed to me that some seventeen years ago, a white man got missing similarly and was never seen or heard of again to date. He suspected whatever happened then may have happened to Castro. At this juncture, we all remembered he was on the ski with the lady. My brother broke down in tears and started talking about how he could have prevented all this if only Castro had listened to him. He said he felt something was going to happen and that was why he kept asking him to return to shore.

As we contemplated our next line of action, a man from the town showed up. He claimed there was an oracle in Ada who could help us find the missing persons. He added that the oracle was very powerful, and such matters can be easily handled by it. Though I wasn’t very superstitious, I felt obliged to go along since we were in a fix.

What else could we do? I was a little scared of the ensuing encounter with a priest, so I declined to join them at the shrine. I had a little money on me, so I decided to return to the hotel and gather some money in case we had to make any payments later on. I was in a dilemma, lost in thought and wondering if perhaps this oracle could help. One returned with news that the consultation would cost GHC100 and a bottle of schnapps. I wondered silently if the schnapps was for the gods or for the priest.

Anyway, I went back inside and returned with some money. I joined them this time to go and see for myself. The fear of what lay ahead scared me a bit. I wondered what the shrine looked like and if it would have any future repercussions on me. But Castro was worth every bit of the sacrifice that was ahead.

When we got to the town proper, there were cheers all over. The children especially were awed and thrilled to see me. The chants and the shouts were very loud, but I was completely lost in a world of chaos, sorrow and pain. If anyone had looked in my eyes, it would have been obvious I was in no way enjoying the attention and the cheers. Though I tried to smile at a few of the children who came close enough, I fidgeted in my head in ways only sorrow could dictate.

The journey to the shrine was a blend of different emotions. On arrival, we were made to take off our shoes and offered a seat. I wondered if the priest would recognize me. I chuckled to myself. Do the gods also watch football? At least I could steal a moment of joy in all this turmoil.

We sat down and the questions started. The Adas speak a native language called Dangme. The priest spoke the language and since we didn’t comprehend, we had someone interpret for us. He inquired if the lost person was someone of high repute.

That question remarkably gave me faith. Perhaps, sparked a glimmer of hope in all the surrounding darkness. I mean, how could he have guessed so wildly and still had it right? Unless of course, there was a supernatural presence telling things in the unknown. We answered in the affirmative, and he gave us a wry smile.”

Was that something good or bad?

This except was used with permission from the publishers of the book. Republication or production is not allowed.

I'm Adwenpa-Hene |Blogger & Broadcaster Journalist. I am the CEO and manager of this noble website. I publish on Entertainment, Sports, Politics, Lifestyle, and Technology. You can also follow Us on : YouTube Channel - My Ghana Media TV, Facebook - MyghanaMedia TV , Twitter - @MyGhanamedia2 & Instagram - My Ghana Media TV. Email Address: [email protected] Contact Us: 0200818719
@@MyGhanamedia2
Previous Dr. Bawumia, Kan Dapaah, IGP And Others Mourn With Tobinco
Next Video: “If Am Supporting Alan, Is Alan Not A Human Being” – Kennedy Agyapong Blasts NPP Executives