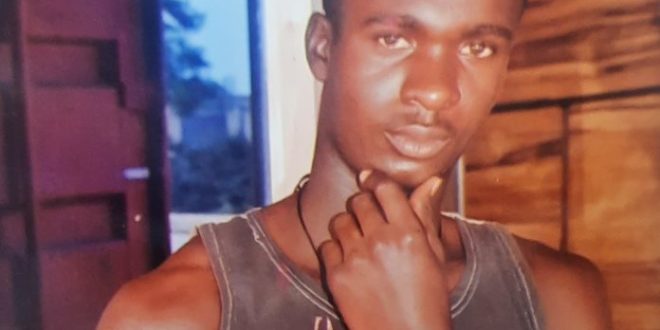 The family of murdered Albert Donkor have stated that they do not want to see the dead body of their deceased son until they get justice.
27 -year- old Albert Donkor, a footballer and digital television installer, died under mysterious circumstances in Nkoranza.

The late Donkor is said to have been picked up from his Nkoranza South home by armed officers at 2:00am on April 24, 2022 in an unregistered vehicle on an anti-armed robbery operation.

Police sources reportedly told the family Donkor was hit by a bullet by a supposed member of an armed robbery gang when the victim was leading them to other accomplices.

But the family accuses the Police of masterminding the killing of an innocent man adding that Albert may have been targeted after he chanced on a robbery operation involving some police officers.

On Tuesday 16th May 2022, some irate youth poured onto the streets in a heated confrontation with the Police.

The Police had to fire gunshots to disperse the irate crowd.

According to the Uncle, Albert Donkor told them that one of the police officers who was involved in the robbery lived with his family there but fled when the incident happened .

Meanwhile, he said even if they do not get justice in Ghana, they will go to International Court to seek justice.