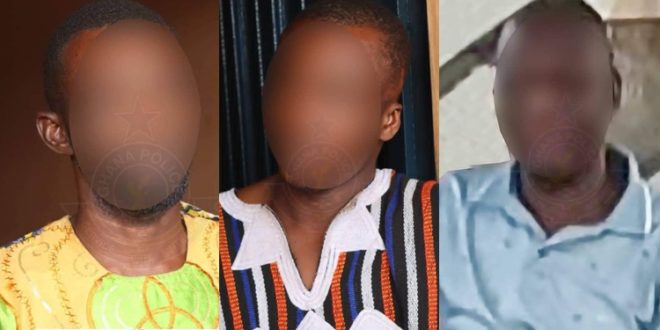 The Police have arrested three (3) persons in connection with the murder of a 27-year-old lady at Sefwi Bekwai Atwumah in the Western North Region.

According to the police, the deceased, known as Martha Tetteh, a resident of Kumasi in the Ashanti Region, had travelled to Sefwi Bekwai on June 27, 2022, allegedly to consult a spiritualist.

Her headless body was later found dumped in an uncompleted building at Sefwi Bekwai.

See also  MCAG To Akufo-Addo: We Will Provide Evidence Of ‘Galamsey’

Suspect Solomon Sam, alias Paa Solo, who allegedly introduced the deceased to the self-styled spiritualist, was arrested on July 12, 2022, at his hideout at Bibiani.

Further investigation led to the arrest of suspect Osofo Attah, the spiritualist.

“During the interrogation process, suspect Osofo Attah admitted to being involved in the crime and mentioned suspect John Nana Addai, alias Akwasi Kokoreh as the one who contracted suspect Solomon Sam to lure the victim to Sefwi Bekwai to consult the spiritualist,” Police indicated.

The suspect, John Nana Addai was also arrested on July 20, 2022, at Sefwi Atronsu.

The body of the deceased has been deposited at the Bibiani government hospital for preservation and autopsy.

The police assured the public of a “thorough investigation into the case to bring all perpetrators to face justice.”

I'm Adwenpa-Hene |Blogger & Broadcaster Journalist. I am the CEO and manager of this noble website. I publish on Entertainment, Sports, Politics, Lifestyle, and Technology. You can also follow Us on : YouTube Channel - My Ghana Media TV, Facebook - MyghanaMedia TV , Twitter - @MyGhanamedia2 & Instagram - My Ghana Media TV. Email Address: [email protected] Contact Us: 0200818719
@@MyGhanamedia2
Previous Dean of UG School Of Law Outlines 7 Ways NPP Will ‘Break The 8’
Next Minority MPs Gather Signatures To Kickstart Vote Of Censure Against Ofori-Atta