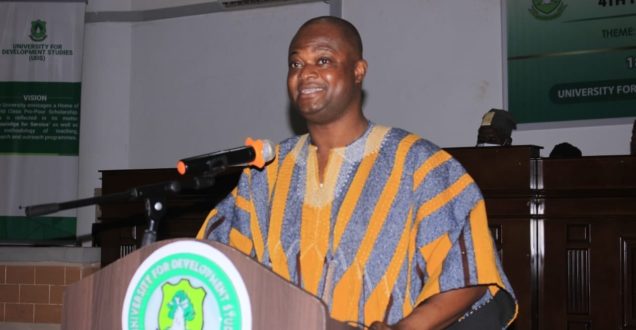 Dean of the University Of Ghana School Of Law, Professor Raymond Atuguba has outlined seven key points he describes as the reasons why the New Patriotic Party (NPP) wants to ‘break the eight’.

The Law Professor listed these points when he spoke on the theme: “Ghana at the Cross Roads” at the 4th Triennial Conference 2022 organised by the Ghana Studies Association in Tamale.

According to Prof. Atuguba, “Break the 8 has many more elements, even if stealing Election 2024 and installing a stooge is at the nerve center of it.

The elements of the clannish edifice of Break the 8,” he outlined as follows:

1. First, a concerted attempt to obliterate or at least devalue, including in the basic Textbooks that we use to teach our children the history of our nation, the central role of Dr. Kwame Nkrumah in the nationalist struggle and the early years of national reconstruction and his enduring legacy in Ghana, Africa and around the world, and to replace that with a very inadequate alternative, their Dr. J. B. Danquah-I will euphemistically call this project, “The Founders of the Nation Project”;

2. The Second Project, which they euphemistically call, “The Financial Clean-up Project”, involves the identification, discipline, emasculation, strangulation, and destruction of every source of financial power, other than theirs, at a scale and pace never seen in our democratic governance, so that in 2024, they would be able to financially determine the contestants and winners of the elections, in the monied democracy that we run;

3. Thirdly, the project involves the capture and buy-out of all other parties, and some elements of the major opposition party, again, with financial incentives at a scale never seen in the last 30 years, so that these parties and elements will be at least neutral, and at worse attack dogs of the opposition, and ready and willing to call the 2024 Election for the stooge;

4. Fourth, an insistence that at the micro, meso and of course the macro levels of the public services, there is unalloyed obeisance to the political leadership for good or for bad, extending to formal and informal attempts to replace anyone suspected of even the least disloyalty, dismally reflecting in the removal, for the first time in our political history of Vice-Chancellors of public universities, purely on suspicion of party-political disloyalty;

5. The fifth element of “Break the 8” involves the incubation of parallel security forces, some forcefully integrated into some regular forces, and some not, and the use of these guns for hire for all and any forms of physical violence; culminating, some have argued, in their deployment for Election 2024, against the backdrop of real or orchestrated evidence of terrorism and violent extremism, for the purpose of restricting freedoms, terrorizing the opposition and robbing the Election;

6. Significantly, project “break the 8” also involves the targeting of all critical national voices, including those in academia, media, civil society, and even faith-based organizations, either buying them out, that is, paying them for their silence, or hounding them using the instrument of state force such as the security services, the military and the police, and the instruments of the administrative state, such as the tax authorities and the regulatory authorities, and also aimed at ensuring their silence or support, when the call on Election 2024 is made on 8th December that year; and

7. Seventh and finally, a brazen urge to do whatever is necessary to achieve set goals, no matter the cost to human lives, to the national economy, and to institutions built over a century and a half, including the most extreme methods of removing an Electoral Commissioner from office on trumped up charges, the first in our democratic history, and the storming of a sitting court to free political operatives and apparatchiks, in order to send a very clear message that the agenda will be accomplished by hook or crook, fair or foul, even if it leaves no man or woman standing, and all this is mediated and spurred on by a certain toxic masculinity that has taken aggressive capture of our politics.