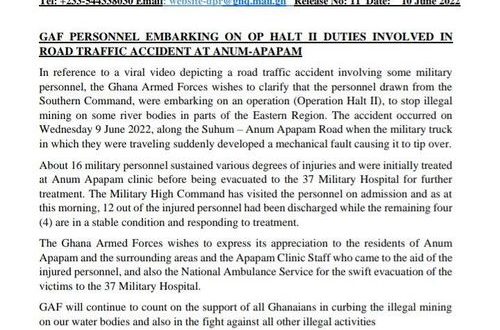 The Ghana Armed Forces (GAF) has said in reference to a viral video depicting a road traffic accident involving some military personnel, that the personnel drawn from the Southern Command, were embarking on an operation (Operation Halt II), to stop illegal mining on some river bodies in parts of the Eastern Region.

The accident occurred on Wednesday 9 June 2022, along the Suhum – Anum Apapam Road when the military truck in which they were traveling suddenly developed a mechanical fault causing it to tip over.

About 16 military personnel sustained various degrees of injuries and were initially treated at Anum Apapam clinic before being evacuated to the 37 Military Hospital for further treatment.

See also  Covid-19: Have You Provided Us Nose Masks That We’re Not Wearing? -MP Questioned After Refusing Handshakes

The Military High Command has visited the personnel on admission and as at this morning, 12 out of the injured personnel had been discharged while the remaining four (4) are in a stable condition and responding to treatment.

“The Ghana Armed Forces wishes to express its appreciation to the residents of Anum Apapam and the surrounding areas and the Apapam Clinic Staff who came to the aid of the injured personnel, and also the National Ambulance Service for the swift evacuation of the victims to the 37 Military Hospital.

“GAF will continue to count on the support of all Ghanaians in curbing the illegal mining on our water bodies and also in the fight against all other illegal activities,” a statement said on Friday June 10.

“They came here with a plane but decided to take their military car back home, but they were not lucky enough.

Their vehicle somersaulted many times” An anonymous man said.