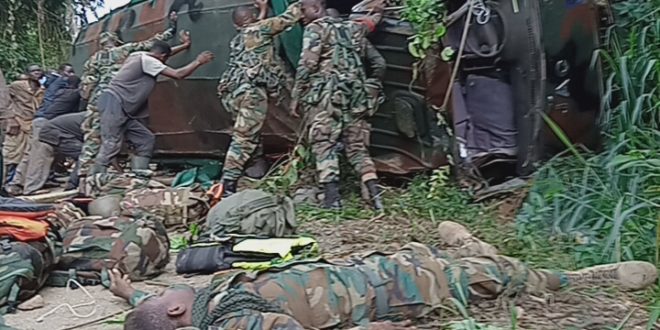 The accident occurred on Wednesday 9 June 2022, along the Suhum – Anum Apapam Road when the military truck in which they were traveling suddenly developed a mechanical fault causing it to tip over.

About 16 military personnel sustained various degrees of injuries and were initially treated at Anum Apapam clinic before being evacuated to the 37 Military Hospital for further treatment.

The Military High Command has visited the personnel on admission and as at this morning, 12 out of the injured personnel had been discharged while the remaining four (4) are in a stable condition and responding to treatment.

“They came here with a plane but decided to take their military car back home, but they were not lucky enough.

Their vehicle somersaulted many times” An anonymous man said.

I'm Adwenpa-Hene |Blogger & Broadcaster Journalist. I am the CEO and manager of this noble website. I publish on Entertainment, Sports, Politics, Lifestyle, and Technology. You can also follow Us on : YouTube Channel - My Ghana Media TV, Facebook - MyghanaMedia TV , Twitter - @MyGhanamedia2 & Instagram - My Ghana Media TV. Email Address: [email protected] Contact Us: 0200818719
@@MyGhanamedia2
Previous GAF Confirms Soldiers Were Involved In Horrific Accident At Anum Apapam
Next Economic Consequences Of Flooding In Ghana