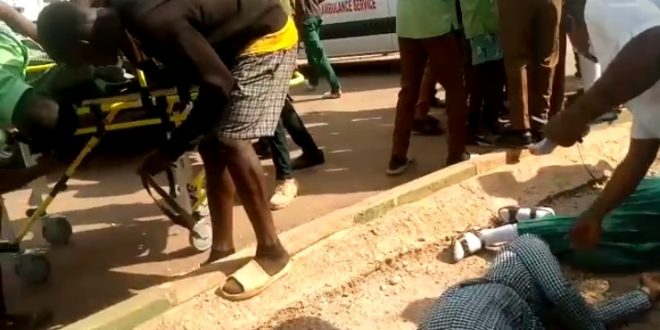 Report: Islamic SHS Students Demonstrated Because They Lost Their Mistress To Speeding Vehicle

Reports garthering  indicates that students of the Islamic Senior High School  were gingered to go on demonstration after one of their School Mistresses was hit by a car in front of the school by a speeding vehicle.

This was because there were no speed rumps in front of the school.

On Monday, June 13, 2022, some students of the Islamic Senior High School, Abrepo, Kumasi, took to the streets, and blocked sections of the road to demonstrate against frequent motor traffic accidents in front of their school.

According to reports, the students went to protest because there were no speed ramps in front of the school and as a result, a lot of pedestrians had been hit by speeding vehicles at the spot.

Unfortunately, during the protest which started peacefully, the Police responded to disperse the students and open the road to normal traffic flow.

The students pelted the Police with stones and the Police used pepper spray and fired warning shots in an attempt to disperse them.

Due to this, about 20 students passed out and were rushed to the hospital.

Watch the videos below:

Giving an account of the incident on Atinka TV‘s morning show, Ghana Nie with Ekourba Gyasi Simpremu, Atinka TV’s Regional Correspondent and a Reporter at Agyenkwa FM, Obofour Michael, said the school authorities had written to the Kumasi Metropolitan Assembly(KMA) to request for a speed rump on that stretch but for so many years, nothing had been done about it.

“The road has been there for a long time. It is the main road from Abrepo to Barekese. It is not a new road, the authorities have formally written to request for speed rumps but it has yielded no positive results. Just Last Friday, a car hit one of their school mistresses in front of the school and this infuriated the students to embark on a protest,” he said.

Meanwhile, it has been reported that when the Inspector-General of Police (IGP), Dr. George Akuffo Dampare went to Kumasi to assess the situation, he engaged with the Urban Roads and Highways Authority in respect to the speed rumps, pending a positive response.

For the students who collapsed and were sent to the hospital, Obofour Michael said most of them have been discharged and those who were in critical condition are out of danger.

Islamic SHS old students disappointed in police
The Old students of Kumasi Islamic Senior High School have shown  disappointment in police for firing live bullets on campus event as students protest to press home safety within the school community. The old students say it’s enough for the police to have protesting students calmed but not to the extent of firing bullets.
See also  Sam George tackles Gabby: ‘You Can Be Against LGBTQ+ Bill, I’m Against Your Cousin’s Corruption, Misrule’

Meanwhile, the Inspector-General of Police (IGP), Dr George Akuffo Dampare has removed and interdicted the deputy Ashanti regional commander DCOP Kwasi Akomeah-Apraku and Two other senior officers following Monday’s clash between the police and students of the Islamic Senior High School in Kumasi.