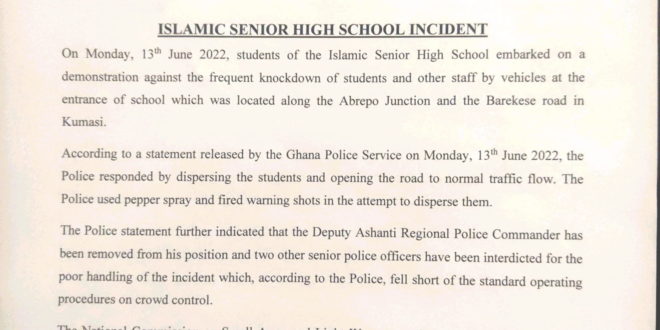 Small Arms Commission and the Peace Council have in a joint statement urged the Ghana Police Service to speed up investigations into the recent shooting incident at Islamic Senior High School in the Ashanti Region.

The two institutions said while they appreciate the speed with which a probe was initiated, they want it to be completed speedily to ensure a boost in public trust in the police service.

The statement said the police must make public the outcome of the probe and mete out punishment to officers found to have misconducted themselves in the course of the operation that left a number of students of the school hospitalised.

“The National Commission on Small Arms and Light Weapons and the National Peace Council wish to commend the Ghana Police Service for the swift action in sanctioning their officers for breach of Police procedures and instituting a further investigation into the incident. We wish to urge the Police to speed up the investigations into the matter and in the spirit of enhancing public confidence in the work of the Ghana Police Service inform the general public of the outcome of the investigation and sanctions meted out to officers found to have misconducted themselves,” the statement said.

About 30 students of the school were rushed to the hospital after police allegedly opened tear gas on them while they were demonstrating over frequent knockdowns in front of the school.

The students of the school were said to have blocked the road in front of their school in the course of their protest, prompting authorities to invite the police.

The police have been accused of using excessive force to disperse the demonstrating students from the streets.

Three senior officers have been interdicted by the IGP over the incident.

Meanwhile, the National Peace Council and the Commission for Small Arms and Light Weapons further applauded the management of Islamic SHS and parents for their respective roles in ensuring that the situation is brought under control.

They further cautioned the public against making comments that incite violence. 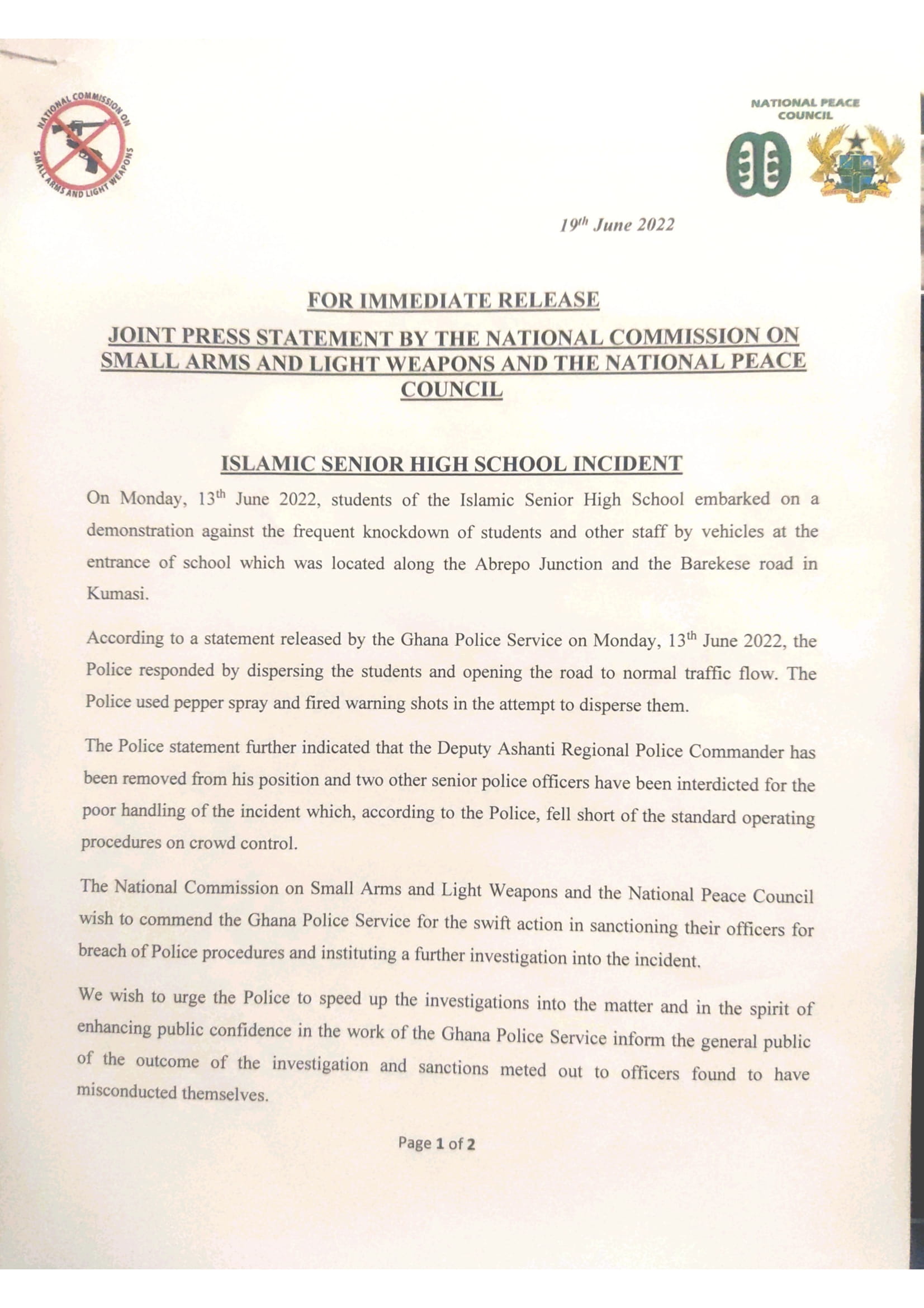 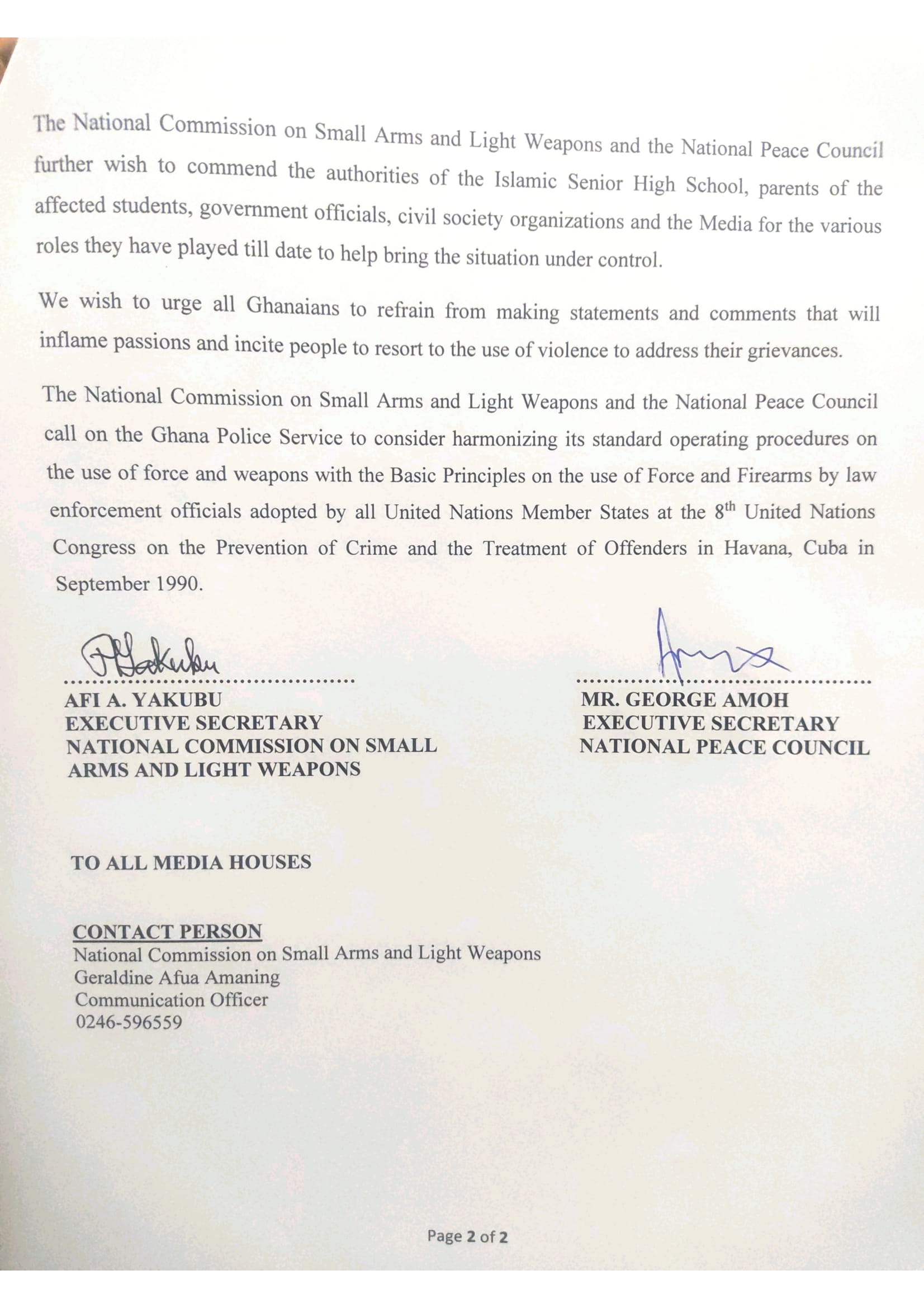 I'm Adwenpa-Hene |Blogger & Broadcaster Journalist. I am the CEO and manager of this noble website. I publish on Entertainment, Sports, Politics, Lifestyle, and Technology. You can also follow Us on : YouTube Channel - My Ghana Media TV, Facebook - MyghanaMedia TV , Twitter - @MyGhanamedia2 & Instagram - My Ghana Media TV. Email Address: [email protected] Contact Us: 0200818719
@@MyGhanamedia2
Previous My Advice For Establishment Of University In Bunso Was Ignored – Okyenhene
Next Dr. Bawumia Is A True Son And Very Loyal – Former President J. A Kufuor