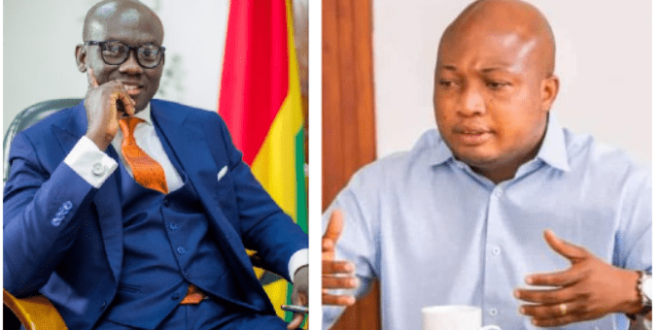 National Cathedral: Retract Your False Claim Against Me Else I will sue – Attorney General Tells North Tongu MP

Minister of Justice and Attorney General, Godfred Dame has denied allegations of conflict of interest made against him by North Tongu Lawmaker, Samuel Okudzeto Ablakwa relating to the National Cathedral project.

He described the allegation as false and one that is being made either out of ignorance or mischief.

Mr Dame asked the opposition lawmaker to retract and apologise to him else he will institute legal action against him.

Mr Ablakwa had claimed that his checks have revealed that Mr Dame was the secretary to the private company that was awarded the contract for the project at the time he was also the Deputy Attorney General.

“In any case, this is registered as a private entity, not a state-owned entity. It is his name, not the position, not the office, 2019 when he was the deputy.

“Guess what,” he added “in 2019, Godfred Dame was a member of the PPA Board and our further digging reveals that he did not recuse himself and David Adjaye was being awarded all of this colossal sum of money in the name of sole-sourced contracts.

“When you read the Public Procurement Authority (PPA) letter that we revealed yesterday, signed by the disgraced ABA Agyei (Former PPA CEO) who is being prosecuted now by the Special Prosecutor, you will realize that in that letter, they make the most outrageous, the most outlandish justification for granting Sir David Adjaye (architect of Nat’l Cathedral ) this sole-sourced contract.

See also  Ningo-Prampram MP : Eugene Arhin Would’ve Been Sacked If Akufo-Addo Was Up To His Game

“If you read that letter carefully, they say that they are granting David Adjaye the sole-sourced contract by virtue of the Public Procurement Act 2003 Act 663 Section 72(5b).”

But responding to him in a statement issued on Wednesday June 22, Mr Dame said “The foregoing allegation is utterly false. Mr Ablakwa’s completely dishonest allegations have spurred other members of the public to make similar statements about me, either out of ignorance or plain mischief.”

He added “I considered the allegation of Ablakwa malevolent, ill-inspired for the simple reason that a cursory examination of the facts would have revealed the untruth in them. I call on the Member of Parliament to retract and apologize to the public for the falsehood he has published against me, failing which I may institute legal actions against him.”

The National Cathedral Secretariat has clarified that the project is a public, not private.

Bringing finality to the debate as to whether the project is state or privately-owned, the Secretariat in a statement on Friday June 17 said “In his first official announcement on the project on March 6, 2017 the President underscored the nature of the project as a national cathedral for interdenominational worship services for the nation.

“Subsequent elaborations, led to three main reasons as the rationale for the project, namely i) gesture of thanksgiving ii) symbol of the Christian presence and contributions to the nation, and iii) a personal pledge to God. Of these three reasons, the personal pledge came to be associated with the Cathedral as a “private” project that needed to be developed without state support.

Reacting to this in a statement on Tuesday June 21, Mr Ablakwa said “Incorporation documents I have obtained from the Registrar General exposes another false claim contained in the 7-page June 17, 2022 press release by the National Cathedral Secretariat and signed by Executive Director, Dr. Paul Opoku-Mensah.

“Contrary to the information provided in the said press statement and on the Nicodemusly updated national cathedral website (after we exposed the the Pastor Otabil deception), to the effect that all the Board of Trustees have been registered as Directors of the National Cathedral of Ghana; we note surprisingly, that the venerable Bishop Dag Heward-Mills, Presiding Bishop of the Lighthouse Group of Churches and the esteemed Rev. Prof. Cephas Omenyo, Former Moderator of the Presbyterian Church were not registered as directors on the incorporation date of 18th July, 2019.

“The two revered clergymen have at all material times been clearly left out, and substituted with the following names: Samuel Antwi and Kingsley Ofosu Ntiamoah. Why then is the National Cathedral Secretariat misleading the Ghanaian public and the world that all the published trustees are registered as directors?”

See also  Bring All The Needed Requirements With Your Boys For Reverse Of The Curses Invoked - Manhyia Palace Orders NDC.

He added “One wonders if Bishop Dag Heward-Mills and Rev. Prof. Cephas Omenyo are aware that despite the public misrepresentations, their names have been patently omitted from the list of eminent registered directors?

“The list of falsehoods, misrepresentations, opacity, lawlessness and blatant corruption associated with this cathedral project is now a bottomless pit.

“Christians in Ghana may have to declare a 40-day intense fasting and prayer to purge and rescue Akufo-Addo’s drowning cathedral of lies.”