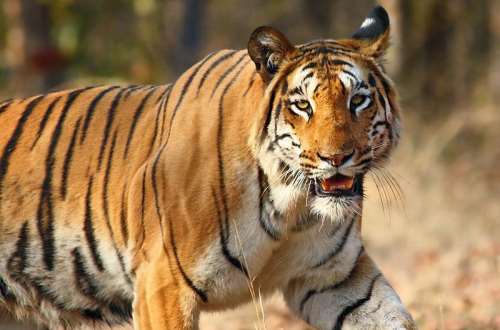 Tiger Storms Sunyani As Residents Lockdown, Eats Only Intestines Of Its Prey.

Some residents of Sunyani are reportedly living in fear for some days now following a suspected wild animal roaming around some suburbs of the city and killing stray animals.

The wild animal, believed to be a tiger, is said to be attacking and killing animals such as goats, sheep and dogs at night.

The tiger, according to some residents, only eats the intestines of its prey and leaves the remaining carcass in the open.

Areas said to be terrorized by this alleged tiger include New Dormaa, Pastoral Centre and parts of Odumase.

The situation has become the talk of the town as people living in the said areas appear helpless. They are calling on the Police to step up night patrols and possibly kill the suspected tiger.

Others also say the presence of the tiger is more spiritual than physical as this is not the first time it is happening in Sunyani.

Mr. Owusu-Ansah, a resident told our correspondent that a similar incident happened in the same areas in 1996 and 1997, and repeated itself about 15 years.

A source at the Sunyani Traditional Council told this reporter that in the previous instances when it happened, Nananom had to perform some rituals to drive away the wild animal. He said the elders would meet to decide the next line of action.

The Police is yet to receive a formal complaint from residents about the matter but say it is working to ensure the safety of all residents in the Bono regional capital.