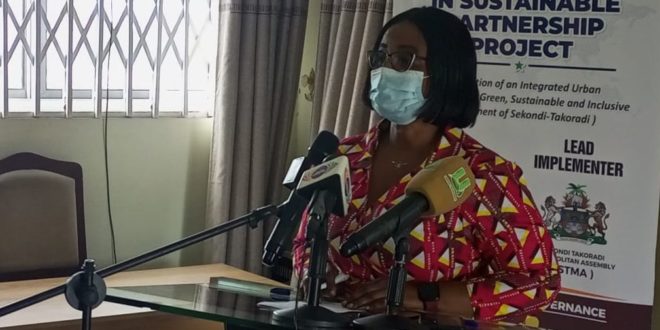 STMA Dir. of Education Worried Over 700 SHS Students Drop Out Due To Pregnancy, Deviancy

For the same academic year, 67 played truant after registering for the West African Senior Schools Certificate Examinations (WASSCE) as compared to 362 students who have so far dropped out this year.

Nineteen girls became pregnant as compared to 35 recorded so far in this academic year, which is yet to end.

This was disclosed by the Metro Director of Education, Sally Nelly Coleman, in her address at a meeting with the media on the campaign for youth-oriented and gender sensitive topics at the Metro Assembly conference room in Sekondi.

The meeting forms part of stakeholders’ engagement on these topics such as irregular migration, illicit use of drugs, child prostitution, gender-based violence, adolescent reproductive health and teenage pregnancy in line with the implementation of the Twin-Cities in Sustainable Partnership Project, TCSPP.

The meeting was aimed at providing a platform to share information and solicit inputs from stakeholders on the topics.

At the basic level, a total of 97 Junior high school students played truant in school after registering for the BECE in the 2020/2021 academic year.

The Metro Education Director, who was concerned about the increasing numbers, blamed the narrative on factors such as the confidence of the students that they cannot be sacked and parents shirking their responsibilities to their children.

The interesting aspect of the whole issue was that many of the children were from middle to high income homes, she observed.

She believes society needs re-orientation, especially in relating to children.

According to her, many children show different characters at home and out of home and there is the need for parents to get closer to their children especially in this technological age to be able to guide them.

“Be your child’s friend, especially on social media so that you will at least get a hint of what she’s up to and the kind of friends she is engaging with,” she said.

She also added her voice to the call for the abolition of all forms of taxes on sanitary pads as, according to her, many girls fall victim in their bid to get money to buy pads.

The TCSPP is a 3-year project being implemented in the cities of Sekondi-Takoradi and Palermo in Italy.

It is funded by the European Union.

The project aims at enhancing the capacity of the city authorities to address the challenges of urban sprawl, climate change and inadequate social safety nets for vulnerable populations within the metropolis.

“We call on the media and all stakeholders to play their role effectively.”