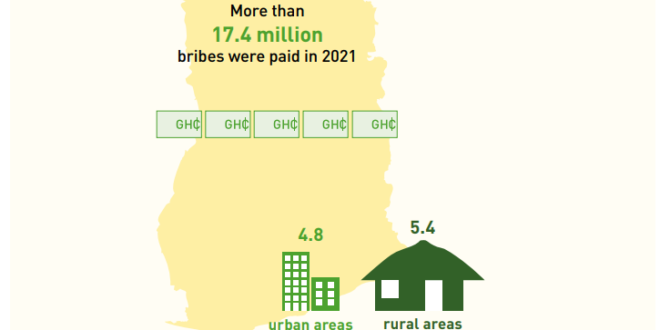 About ¢5 billion in bribes were paid in both the private and the public sectors, a survey by the Ghana Statistical Service (GSS) has revealed.

The report dubbed ‘2021 Ghana Integrity of Public Services Survey’ indicates that 26.7% public sector officials were engaged in bribery acts, whilst 9.1% were officials from the private sector.

According to Government Statistician, Professor Samuel Kobina Annim, corruption was prevalent within the Ghana Police Service.

The service recorded 53.2% corrupt cases, followed by the Ghana Immigration Service and the Ghana Revenue Authority with 37.4% and 33.6% respectively.

Prevalence of bribery in Ghana 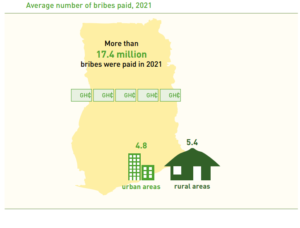 The survey revealed that, on average, there is no difference in the prevalence of bribery in rural and urban areas of Ghana. There are, however, sizable variations across the 16 regions of the country.

On regional basis, the prevalence of bribery in the Bono East, Savannah and Volta regions, for example, were substantially lower than the national rate. The three regions recorded corruption cases of 11.8%, 14.5% and 19.1% respectively.

In the Western North, Ahafo and North East regions, the corrupt cases reported were substantially higher, at 53.4%, 47.0% and 41.9% respectively.

In addition, the report showed that the prevalence of bribery in Ghana also varied across age groups.

Bribery among the educated

The survey further showed that people with different levels of educational attainment experienced bribery to a different extent, and many factors may explain the differences that influence the acts of bribery.

“One relates to the type of public official with whom people interact and the type of public services sought. It may also be common for corrupt public officials to target wealthier socioeconomic groups to a greater degree than poorer socioeconomic groups, as the former may be considered more likely to have the means to pay bribes”, the report explained.

Indeed, the survey showed that the group most likely to interact with public officials and most likely to experience bribe requests is those with the highest level of educational attainment – that is bachelor’s degree or above. 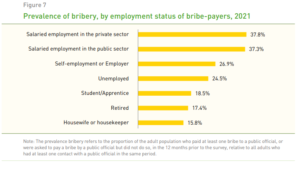 This means that Ghanaians with the highest level of tertiary education are 1.7 times more likely than people with no formal education to report that they paid a bribe, or were asked to pay a bribe but refused when in contact with a public official.

As in the public sector, the contact rate with private sector employees varied substantially across the regions of Ghana, with the contact rate being much higher in the Greater Accra, Western and Western North regions, at 59.1%, 50.0% and 45.0% respectively, than in regions such as the Upper West, Oti and Bono East, at 11.2%, 17.7% and 18.5% respectively. 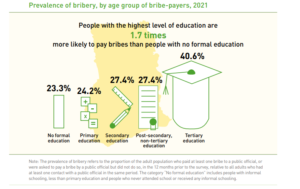 Also, the contact rate with private sector employees is much higher in urban areas (46.9%) than in rural areas (27.6%) of the country as many more private services are more likely to be accessed in the former.

Prevalence of bribery in the private sector 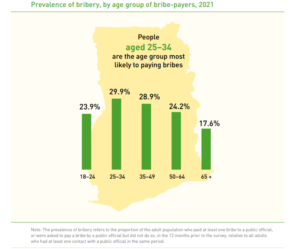 In addition, compared with the public sector, where there is no notable difference in the prevalence of bribery in urban and rural areas, people are more likely to pay bribes to private sector employees in rural areas than in urban areas.

The report also said there are also notable variations in the prevalence of private sector bribery across the regions of Ghana.

I'm Adwenpa-Hene |Blogger & Broadcaster Journalist. I am the CEO and manager of this noble website. I publish on Entertainment, Sports, Politics, Lifestyle, and Technology. You can also follow Us on : YouTube Channel - My Ghana Media TV, Facebook - MyghanaMedia TV , Twitter - @MyGhanamedia2 & Instagram - My Ghana Media TV. Email Address: [email protected] Contact Us: 0200818719
@@MyGhanamedia2
Previous Addai-Nimoh To Ntim: ‘Your Name Will Be Written In Gold, If You Help NPP To Break The 8’
Next Ghana: Lands Commission officers, Judges And Immigration Officers Received Largest Cash Bribes In 2021 – Research