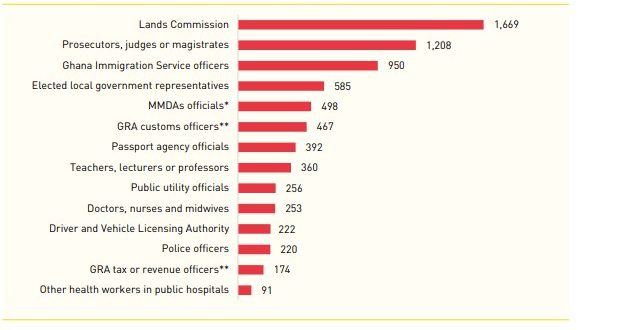 A 2021 report by the Commission for Human Rights and Administrative Justice, Ghana Statistical Service and United Nations Office on Drugs and Crime ranks institutions that receive bribes.#3NewsGH pic.twitter.com/rhvHvCzugq

Lands Commission officers, prosecutors, judges or magistrates and immigration officers are the top three categories of public officials who received the largest cash bribes paid in 2021. 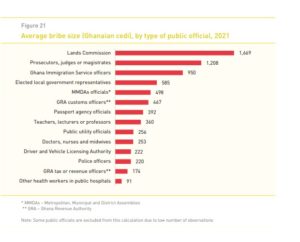 This revelation is according to a survey conducted by the Ghana Statistical Service (GSS) and the Commission on Human Rights and Administrative Justice (CHRAJ). The survey is dubbed, ‘2021 Ghana Integrity of Public Services Survey’.

According to the report, the average highest cash bribe [GHc1, 669] was paid to Lands Commission officers, followed by prosecutors, judges or magistrates with an amount of GHC1,208 and GHC950 for immigration officers.

With these findings, the report suggests that “the largest average bribes are paid to public officials with whom most citizens have little contact in their daily lives.”

These large bribes, the GSS and CHRAJ said although rarely paid, generally “influence important decisions by public officials, which can have substantial economic or personal consequences (for example, by influencing land-related decisions, immigration matters, or prosecutors and judges).”

The report also indicated that smaller average amount of cash bribes were paid to health workers and police officers.

It highlighted that the smaller cash bribes paid are mostly given to public officials who engage frequently with members of the public.

See also  Corruption Is Not Fought Alone Or Quietly – Domelevo

“Conversely, the dynamics behind smaller bribes seem to be related to public officials with whom people have more frequent contact (such as police officers, and health care workers, public utility officials) as well as to bribes that are paid to avoid moderate fines or sanctions, to maintain utility connections or to reduce tax payments,” the report added.

The survey also revealed that about GH¢5billion in bribes were paid in both the private and the public sectors.

It disclosed that 26.7% of public sector officials were engaged in bribery acts, whilst 9.1% were officials from the private sector.

According to Government Statistician, Professor Samuel Kobina Annim, the report indicates that corruption is prevalent within the Ghana Police Service.

The Police Service recorded 53.2% of corrupt cases, followed by the Ghana Immigration Service and the Ghana Revenue Authority with 37.4% and 33.6% respectively.

Read the full report below: