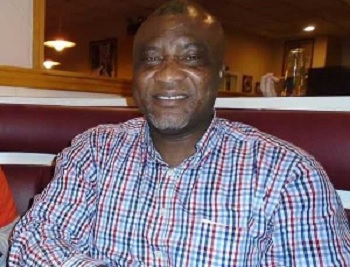 The Director of Operations of the Alan Kyerematen campaign team, Hopeson Yaovi Adorye  has revealed what his boss, the Minister of Trade and Industry, told him after his ethnocentric comment against northerners in the ruling New Patriotic Party (NPP).

According to him, the presidential hopeful of the NPP endorsed his inflammatory comment made at the Health Walk organized in Kumasi in the name of Alan Kyerematen.

Hopeson Adorye indicated that he received a call from his boss Alan Kyerematen endorsing his comments at the ‘Aduro Wo So’ Health Walk organized for him.

The close associate of the Minister received serious backlash after he said Northerners who belong to the Dombo faction of the NPP have automatic slot as running mate and not presidential.

“In 1992, Albert Adu Boahen, who represented Danquah contested with a Dombo. In 1996, we had the Great Alliance but in 2000, it came to Kufuor, who is a Busia, and he ran with a Dombo (as his running mate). Then after Kufuor, it moved back to Danquah, with President Akufo-Addo. He also contested the election with another Dombo (as his running mate), who is Vice President Mahamudu Bawumia. If it went to Danquah, came to Busia, went back to Danquah, where should it go now, is it not Busia?” Hopeson Adorye said.

His comments were condemned by well-meaning members of the New Patriotic Party who believe that the party needs everyone on board and therefore divisive comments such as his should not be encouraged.

Speaking in an interview with Accra-based Metro Television, Hopeson Adorye indicated that he had the support of Alan Kyerematen albeit people in NPP have condemned his comment that seeks to divide the party’s front and destroy unity in NPP.

According to him, he apologised because Alan Kyerematen advised him to do so in order to let matters settle.

“This morning, I had a call from Alan Kyerematen and he said he has seen all the commentaries that are going on. He has requested for the video. He has watched it. I did not mean any bad but my statement has been misconstrued so he’s advising me to apologize. I said that’s all, I will not hesitate so I promised him that I am going to do that and around 11am, I released a statement to apologize to the public for that misleading headline… So, I have duly apologized to our Northern brothers,” he said.

I'm Adwenpa-Hene |Blogger & Broadcaster Journalist. I am the CEO and manager of this noble website. I publish on Entertainment, Sports, Politics, Lifestyle, and Technology. You can also follow Us on : YouTube Channel - My Ghana Media TV, Facebook - MyghanaMedia TV , Twitter - @MyGhanamedia2 & Instagram - My Ghana Media TV. Email Address: [email protected] Contact Us: 0200818719
@@MyGhanamedia2
Previous Railway Workers Withdraw Its Intention To Stop Passenger Trains
Next Akufo-Addo: Free SHS, 1D1F, PF&J Have All Been Implemented With Well-being Of Ghanaians At Heart