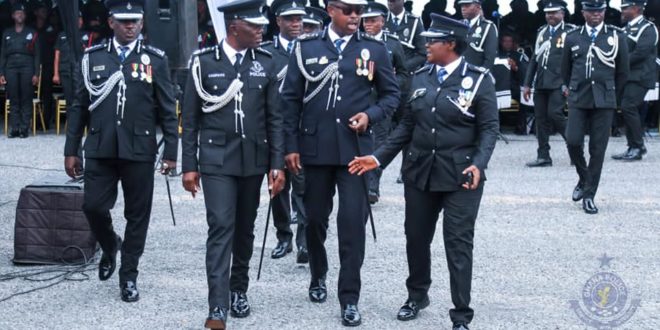 Police Officers Deny Breaking Into The House Of Trassaco Boss

The Ghana Police Service has refuted claims that some Police officers broke into the house of Mr. Ernesto Taricone, of Trasacco Limited.

According to the Service, the officers, acting on information that a suspect was at the residence of Mr. Ernesto Taricone visited the house to execute an arrest warrant.

“Upon arrival at the house, the Police knocked on the door and someone came to attend to them and informed them that Ian Morris was not at the residence at the time,” the statement explained.

The Police therefore left a message for Morris to report to their office.

The statement continued that, “The facts are that Police conducted investigation into alleged land guard activities at Adjiriganor, a suburb of Accra which led to the arrest of five suspects; Akuribilla Annanfo, Razak Seidu, Abdulla Abdul Fatau, Baah Samuel and Francis Agbevedor and the retrieval of a Mossberg pump action gun loaded with ten rounds BB cartridges from them.”

The Police Service noted that, “The suspects were on 26th August, 2022, arraigned before Circuit Court ‘9’, Accra on charges of Conspiracy to Commit Crime and engaging in land guard activities. They were remanded by the Court into Police custody to reappear on 30th August, 2022.

In the course of investigation, it emerged that Mr. Morris Ian of Trasacco Limited contracted the suspects to undertake their illegal activities. A Bench Warrant was therefore issued by the court for his arrest.”

It was based on this warrant that the Police visited the Trasacco boss’s residence.

The statement indicated that Police will continue to look for Morris to execute the Bench Warrant.

“We therefore call on the public to disregard and treat with contempt the baseless claims of forceful entry against the Police and the purported use of commandos since the Police Service has no commandos,” the statement concluded.

I'm Adwenpa-Hene |Blogger & Broadcaster Journalist. I am the CEO and manager of this noble website. I publish on Entertainment, Sports, Politics, Lifestyle, and Technology. You can also follow Us on : YouTube Channel - My Ghana Media TV, Facebook - MyghanaMedia TV , Twitter - @MyGhanamedia2 & Instagram - My Ghana Media TV. Email Address: [email protected] Contact Us: 0200818719
@@MyGhanamedia2
Previous Akufo-Addo To Ghanaians : ‘You Are Lucky To Have Me As President’
Next You Were Too Weak – Gyampo Chides Oyerepa FM For Shutting Down