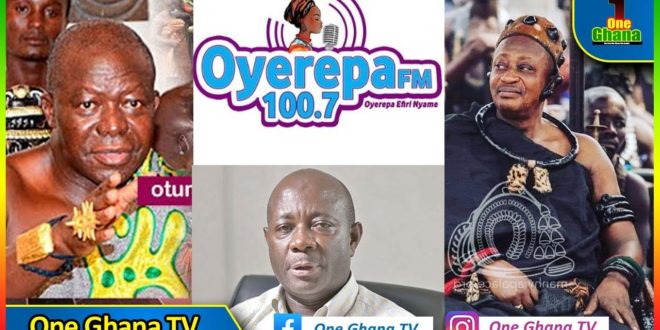 You Were Too Weak – Gyampo Chides Oyerepa FM For Shutting Down

A Professor at the University of Ghana, Professor Ransford Yaw Gyampo, has chided the management of Oyerepa FM for kowtowing to a “suggestion” from the Kumasi Traditional Council to stop operations.

The Kumasi-based stationed shut down on Friday, August 26 after a visit to the Manhyia Palace on Thursday to apologise for comments made by 2012 Presidential Candidate Akwaso Addai Odike against the Asantehene and his chiefs during an interview on the menace of small-scale illegal mining.

The Council, then, asked the management to shut down the station before their apology would be accepted.

According to Prof Gyampo, this directive should have been ignored by management of the radio station.

“For not doing this, Oyerepa FM and its management are not fit to be counted part of the Fourth Estate of the Realm for their demonstration of morbid fear,” he wrote on Saturday, August 27.

For him, some chiefs in Ghana, especially in places where democracy has not thrived, administer justice and maintain peace.

Nonetheless, he maintained that the Council should have reported the radio station’s owners to the National Media Commission (NMC) instead of the directive issued.

“Suggesting the closure of a radio station and acceptance of same by its owners, blatantly offends our laws and democratic tenets.”

Prof Gyampo, therefore, concluded that inasmuch as they are respected and wield enormous powers, chiefs should not overstep their boundaries, especially under the democratic form of government being practised.

“Finally, I reiterate the point that chiefs, regardless of their challenges, are still relevant and deserve our respect.

“But they cannot overstep the boundaries of their powers and role by arrogating to themselves powers that must be exercised only by the state and government.

“They must walk the tightrope of playing their decent traditional-modern roles while complementing the role of the state in order to maintain their relevance.”

I'm Adwenpa-Hene |Blogger & Broadcaster Journalist. I am the CEO and manager of this noble website. I publish on Entertainment, Sports, Politics, Lifestyle, and Technology. You can also follow Us on : YouTube Channel - My Ghana Media TV, Facebook - MyghanaMedia TV , Twitter - @MyGhanamedia2 & Instagram - My Ghana Media TV. Email Address: [email protected] Contact Us: 0200818719
@@MyGhanamedia2
Previous Police Officers Deny Breaking Into The House Of Trassaco Boss
Next It Will Take A New Chief Justice To Repair The ‘Broken Image’ Of The Judiciary – John Mahama [Audio]