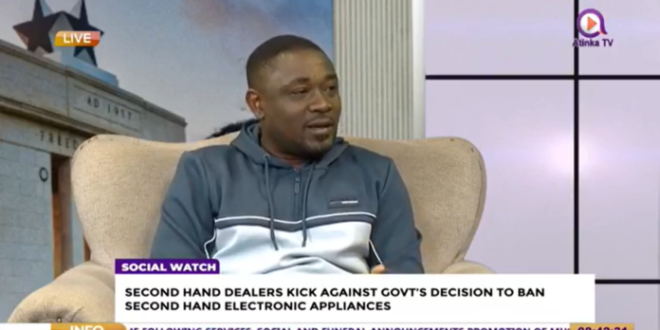 The Concerned Second Dealers Association of Ghana (CSHDAG) has once again hit out at the Energy Commission over the latter’s plan to ban the importation of used items.

Few weeks ago, the Commission, working through the Ministry of Energy, tabled before Parliament a draft to amend parts of the Energy Efficiency Regulations, 2008 (LI 1932).

The regulation is a 14-year-old law that bans the importation or sale (distribution) of used refrigerators, air-conditioners and incandescent filament lamps.

When amended, the scope of the law will be expanded to prohibit other used electronic appliances, such as television sets, metal halide lamps, ceiling fans, standing fans, table-top fans, batteries for renewable energy systems, inverters and solar panels.

See also  I See Nothing Wrong With The1992 Constitution, Says Deputy Attorney General

According to the Commission, Ghana risks becoming an environmental dumping site for used electrical and electronic waste from Europe.

It also said these appliances consume a lot of energy and as well poses health threats on the people.

Due to this, the Second Hand Dealers Association organised a press conference to register their apprehension over the move.

According to him, since the above information went out, a lot of customers have called them, asking if they should dispose their already bought items.

Meanwhile, he said the claims were not entirely true.

“We want to tell the public that there is no proof backing the statement by the Energy Commission,” he said.

When asked his basis for saying what the Energy Commission said was untrue, Daniel Asare said he did a research on the internet to find out if the second hand electrical appliances were really causing harm to people’s health and he found out it was not true, adding that they were surprised by what the Commission stated.

He admitted that the new appliances were good but they were expensive such that people may not be able to buy.

I'm Adwenpa-Hene |Blogger & Broadcaster Journalist. I am the CEO and manager of this noble website. I publish on Entertainment, Sports, Politics, Lifestyle, and Technology. You can also follow Us on : YouTube Channel - My Ghana Media TV, Facebook - MyghanaMedia TV , Twitter - @MyGhanamedia2 & Instagram - My Ghana Media TV. Email Address: [email protected] Contact Us: 0200818719
@@MyGhanamedia2
Previous Galamsey: 3 More Chinese And 6 Ghanaians Arrested; 3 Excavators Retrieved
Next Every Region To Get Passport Application Center – Director Of Passports