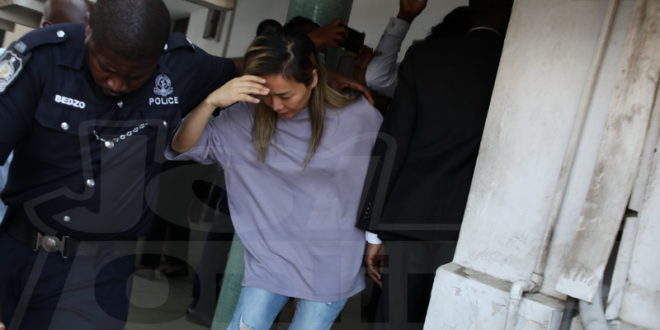 The embattled Chinese galamsey queen, Aisha Huang, is married to a Ghanaian, her lawyer has said.

According to him, Ms. Huang’s husband holds a Master’s degree from a Chinese University.

Speaking in an interview on Accra-based Citi FM on Wednesday, September 14, he said this was revealed to him when they engaged his services.

“I know she is married to a Ghanaian. I know this because of her Ghanaian husband, a businessman in Kumasi and a Master’s degree holder from a Chinese University.”

“He came to my office to engage me as a lawyer,” he stated.

Following her re-arrest some weeks ago, Aisha Huang’s return to the country has been a subject of controversy.

When President Akufo-Addo on Monday said he is “not still sure whether she was in fact deported,” a section of Ghanaians were taken aback.

“Or whether she fled the country the first time and has now come back. There still seems to be some uncertainty about it,” he said at a Ho-based radio station.

Information Minister Kojo Oppong Nkrumah clarified that the notorious Chinese illegal mining kingpin was repatriated from Ghana in December 2018 and not deported.

He further insisted on Joy FM on September 13 that a repatriation order or note was issued to this effect.

According to Mr. Oppong Nkrumah, the ‘galamsey’ queen was put on a flight and she exited the Ghanaian jurisdiction.

However, during her trial at the Accra Circuit Court on Wednesday, the facts presented by the prosecution told another story.

The prosecution said the first accused sneaked out of the country after her initial arrest.

Aisha Huang, according to the D/Inspr Eric Osei-Mensah, then re-entered in a similar fashion this year.

This was after she changed the details on her Chinese passport to aid her to evade the authorities.

“The 1st accused again resumed the small scale mining activities without license and together with the 2nd, 3rd and 4th accused persons engaged in the purchase and sale of minerals in Accra without valid authority granted as required by the Minerals and Mining Act,” portions of the charge fact sheet read.

Meanwhile, she is to remain in Police custody for the next two weeks as the Accra Circuit Court has turned down her request for bail.

I'm Adwenpa-Hene |Blogger & Broadcaster Journalist. I am the CEO and manager of this noble website. I publish on Entertainment, Sports, Politics, Lifestyle, and Technology. You can also follow Us on : YouTube Channel - My Ghana Media TV, Facebook - MyghanaMedia TV , Twitter - @MyGhanamedia2 & Instagram - My Ghana Media TV. Email Address: [email protected] Contact Us: 0200818719
@@MyGhanamedia2
Previous Gospel Singer, Diana Asamoah Reacts To Her Contract Termination
Next Sammy Gyamfi To NPP: ‘You Cannot Set Your Own Questions And Proceed To Answer Same’