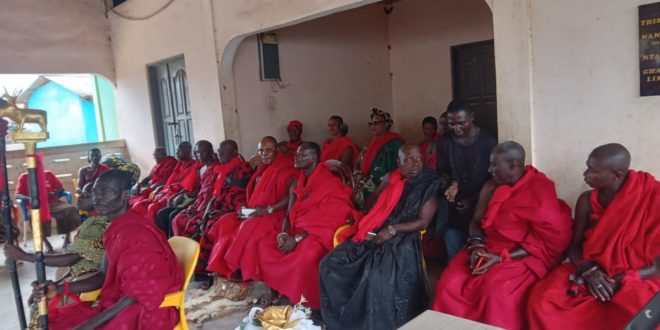 Chiefs in over 20 communities along the Sankor-Cape Three Points road in the Ahanta West Municipality of the Western Region are up in arms against the leadership of the New Patriotic Party (NPP) government led by Nana Addo Dankwa Akufo-Addo.

The chiefs are unhappy with the poor nature of their road, which has been abandoned for several decades.

Following the discovery of oil at deep sea Cape Three Points, it was expected that government will upgrade and reconstruct some roads linking surrounding communities to the rest of the country but the opposite is the case.

Speaking in an interview with Nhyiraba Paa Kwesi Simpson, the host of Connect FM’s Omanbapa morning show on the sidelines of a press conference by some chiefs in the area, Nana Bediako III, chief of Elobonkanta and Gyaasehene Divisional Chief of Lower Dixcove Traditional Area, indicated that they have been cut off from the rest of the country due to the poor nature of their roads.

“The situation is worse whenever rain falls, we cannot leave our communities. There are farmers among us who need good roads to transport their farm produce but they are all left to rot. We have companies including GPHA and Ghana Rubber Estate who have properties here but they are not ready to assist with the excuse that they pay taxes to the government,” he noted.

According to him, various promises made by the Akufo-Addo government to fix their roads have failed.

“We met the Western Region Minister and he told us that the road has been awarded on contract and construction will be completed in two years but nothing has been done after several years. The young people in our communities are losing their cool by the day and we cannot control them again when things get out of hand,” he added.

According to the chiefs, there were several promises made by the government to fix the road before the 2016 and 2020 elections but they are all yet to be fulfilled.

I'm Adwenpa-Hene |Blogger & Broadcaster Journalist. I am the CEO and manager of this noble website. I publish on Entertainment, Sports, Politics, Lifestyle, and Technology. You can also follow Us on : YouTube Channel - My Ghana Media TV, Facebook - MyghanaMedia TV , Twitter - @MyGhanamedia2 & Instagram - My Ghana Media TV. Email Address: [email protected] Contact Us: 0200818719
@@MyGhanamedia2
Previous Chinese Allegedly Slits Girlfriend’s Throat, Sparking Outrage
Next Akufo-Addo : High Inflation Is Not Only In Ghana; It’s The Same In The UK And US