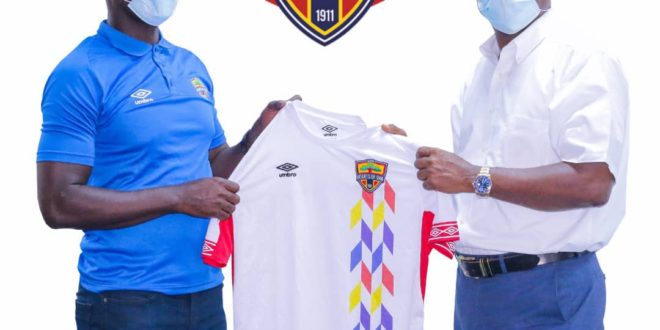 Hearts of Oak board of directors have asked their head coach to step aside following the club’s recent poor performance in the ongoing Ghana Premier League season, Kickgh.com can exclusively confirm.

Head coach of Hearts of Oak, Samuel Boadu has been asked to step aside from his role at the club after uninspiring output since the commencement of 2022/23 season.

Majority shareholder of the club, Togbe Afede XIV mentioned the club’s decision to the former Medeama SC gaffer after a meeting in Accra on Tuesday morning.

Boadu joined the Phobians on a three-year deal after leaving Medeama SC in 2021.

He guided the club to win the 2020/21 Ghana Premier League title and won two FA Cups and a Super Cup title.

Hearts of Oak Board Chairman, Togbe Afede met Coach Samuel Boadu and told him the club want a mutual termination of the contract. It’s been agreed and Boadu’s back room staff have all been told to stay away from training today. pic.twitter.com/ZogUlC7Y3G

Indirectly, was a goodbye from Samuel Boadu to Hearts Of Oak fans.❤️💛💙💚 pic.twitter.com/ZO1jepYTnV

Indirectly, was a goodbye from Samuel Boadu to Hearts Of Oak fans.❤️💛💙💚 pic.twitter.com/ZO1jepYTnV

Coach Samuel Boadu and his Assistants part ways with Hearts of Oak….. according to a top official of the club, the two parties have mutually parted ways pic.twitter.com/yekzcLf2PA

BREAKING NEWS: Hearts of Oak terminate contract with coach Samuel Boadu after one and half year with the club.#WontumiSports pic.twitter.com/Plb9kaYIAl

BREAKING: Hearts of Oak have parted ways with Samuel Boadu after agreeing to a mutual termination. pic.twitter.com/tLGGiTQcTD

The 36 year old was appointed on 1st March 2021. He led the Phobians to their first league trophy in 12 years in the 2020/21 season. pic.twitter.com/wEEKhJBHgX