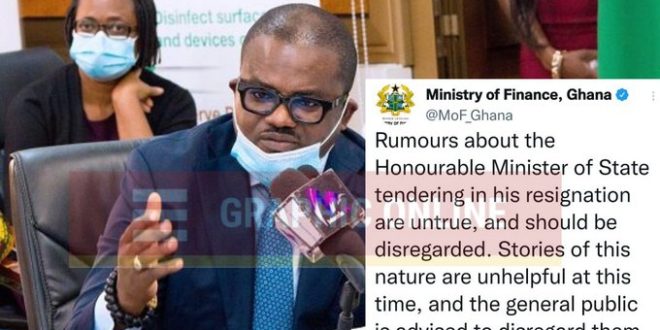 The Ministry of Finance has debunked claims that the Minister of State at the Ministry, Charles Adu Boahen, has tendered in his resignation letter.

Following a press conference by some NPP MPs demanding the dismissal of the Finance Minister, Ken Ofori Atta and the Minister of State, Charles Adu Boahen, NDC Member of Parliament for North Tongue, Samuel Okudzeto Ablakwa, alleged that the latter had tendered in his resignation letter but President Akufo-Addo had refused to accept it.

According to him, this action by the President means he does not appreciate the economic hardship Ghanaians are battling with currently.

In a social media post on Thursday, the Ranking Member on the Foreign Affairs Committee urged Parliament to turn its attention to the President.

See also  After Benefitting, You Want Us To Dialogue – NDC’s Akamba To Akufo-Addo On Galamsey Forum

“Parliament may have to turn the heat on President Akufo-Addo.
“Why is he refusing to accept the resignation of Minister of State at the Ministry of Finance, Charles Adu Boahen?

“The President continues to downplay the profound economic crisis created by his abysmal leadership,” he said in a tweet.

However, the ministry has denied the report in a press statement issued on Friday, October 28th, 2022.

“Rumours about the Honourable Minister of State tendering in his resignation are untrue, and should be disregarded. Stories of this nature are unhelpful at this time, and the general public is advised to disregard them completely,” the statement said.

Rumours about the Honourable Minister of State tendering in his resignation are untrue, and should be disregarded. Stories of this nature are unhelpful at this time, and the general public is advised to disregard them completely.https://t.co/N5q5VavQ5L

Mr. Adu Boahen had come under pressure last Tuesday with some members of the New Patriotic Party in Parliament demanding his removal together with Finance Minister, Ken Ofori-Atta for the current economic crises.

The Majority MPs insisted that the removal of both Ministers will restore confidence in the economy.

However, after meeting the President, the Majority MPs have softened their stance accepting the President’s plea to have the Ministers stay in office to seal Ghana’s bailout deal with the International Monetary Fund (IMF).

I'm Adwenpa-Hene |Blogger & Broadcaster Journalist. I am the CEO and manager of this noble website. I publish on Entertainment, Sports, Politics, Lifestyle, and Technology. You can also follow Us on : YouTube Channel - My Ghana Media TV, Facebook - MyghanaMedia TV , Twitter - @MyGhanamedia2 & Instagram - My Ghana Media TV. Email Address: [email protected] Contact Us: 0200818719
@@MyGhanamedia2
Previous NRSA To Install Cameras On Highways To Reduce Speeding
Next Leadership Is About Being Efficient Not Loud – Kwabena Frimpong To Obiri Boahen