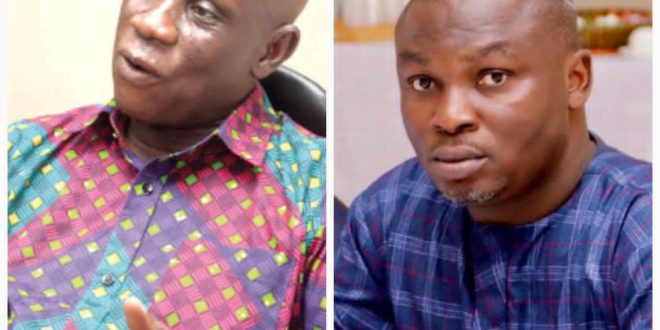 The Deputy Protocol Director at the office of the governing New Patriotic Party (NPP), Kwabena Frimpong, has responded to the party’s former Deputy General Secretary, Obiri Boahen for describing the National Chairman as a timid soul.

Obiri Boahen (Esq) has criticised the approach deployed by the National Chairman, Stephen Ntim in handling the agitations of some party Parliamentarians asking for the sack of Ken Ofori-Attah and Charles Adu Boahen.

He said in an interview with Okay FM that the never-before-seen action of the MPs could create political instability if not handled well.

The experienced Lawyer stated that he expected the NPP Chairman to have held a crunch meeting with the Party leadership and its steering Committee and informed them about how dire the situation was rather than issuing a press statement.

“This is not the NPP and NDC politics on who did this or that. This is a very serious National issue that goes down to the National stability of the country and Western Democracy. It is scary. Nothing like this has happened before in Ghana ever since Don Diego Di Azambuja landed in Ghana.”

In furtherance, he added that “It is nearing 80 out of 138 MPs if you just add 20. And the Chairman of the party says…. what are you coming to do? Stephen Ntim what are you coming to do? If you are a timorous soul; please get out of politics. If you don’t have courage; exit politics. Stephen Ntim as the Chairman of the Party…. the thing is scary for the Party.”

Nonetheless, Kwabena Frimpong, a party youth activist has stated that the modern style of leadership is not necessarily about being loud and noisy but efficient to get the needed results in his response to the former General Secretary of the Party.

Kwabena Frimpong vehemently stated that the comment from Obiri Boahen is unfortunate and demeaning, and he should do the needful by retracting his words, especially describing the National Chairman as “timid.”

“Leadership has long moved from being Noisy or loud to be effective and efficient to get the needed results. Chairman Ntim is too experienced to know the approach that can be deployed to resolve a particular issue like what happened,” said Kwabena Frimpong.

He continued “Chairman Ntim needed to be tactical in his approach in engaging the disgruntled MPs to ensure there is peace in the Party as well as Government to avoid further tension and the release from the National Chairman calm down the situation as we see today.”

“Chairman Ntim’s leadership believes in dialogue rather than being confrontational. What Obiri Boahen must know is that we need everybody on board in our quest to break the 8 which demands that we must be fair when an issue crops up and does lawyer Obiri Boahen knows the behind-the-scenes engagement that has gone on which was master-minded by the National Chairman to Calm down the situation? ,” he further added

In conclusion, the outspoken Frimpong added “My uncle, lawyer Obiri Boahen should have acknowledged and appreciated the National Chairman for stamping his authority in this brouhaha because for some years now a National Chairman didn’t sit down on Unconcerned but acted tactfully as a true leader. ”

On Tuesday, October 25, about 80 NPP MPs held a press conference to demand the dismissal of Finance Minister, Ken Ofori-Attah and Minister of State at the Finance Ministry, Charles Adu Boahen.

They argued that the new persons when appointed will take the place of the duo and bring back the needed confidence in the economy which is struggling.

The Party leadership has also released a statement to engage the Government, Parliamentary Group and other stakeholders for an amicable solution to avoid any mayhem for the party and government.

He made this revelation in an interview with Prince Tsegah on Usay Weytin on Hitz FM.