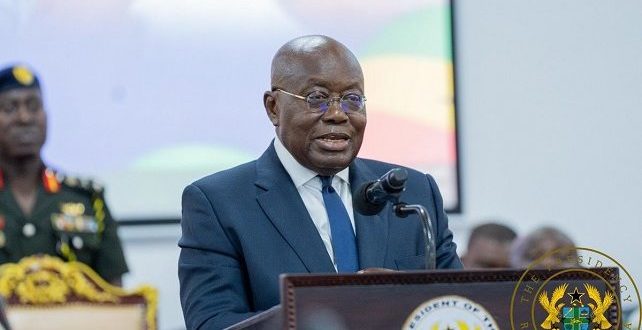 The President of the republic of Ghana, H.E Nana Akufo-Addo on 18th November 2022, sent two ambassadors to represent Ghana’s interest in neighbouring Guinea and Algeria.

They include Ambassador Maxwell Awianga, who has been posted to Guinea and Yaw Bimpong, who is headed for Algeria.

At a short swearing-in ceremony at the Jubilee House, the President described the two as experienced foreign service officials.

He, therefore, asked them to go out there and make Ghana proud by representing the country’s interest.

He talked of historic relations and the cooperation between the two countries which needed further strengthening.

He, therefore, said he counted on them to maintain the good relations in spite of the issues confronting the economies of the world.

He also wished them successful duty tours of those countries, whilst expressing confidence that they were going to make their various experiences count.

On his part, Ambassador Maxwell Awianga, who spoke on behalf of his colleague and on his own behalf, described the opportunity to serve as an honour which will not be taken for granted.

He, thus, expressed appreciation to not only President Akufo-Addo but the government and people of Ghana for the privilege and honour done them.

“We wish to assure you that we will not disappoint you at all, especially as we know too well that many are called but few are chosen,” he stated.

Going at a time when there are security challenges in Guinea and other neighbouring West African countries, including Burkina Faso and Niger, they promised to work hard to support the President’s effort to help restore peace in the sub-region and the African continent.

They also promised to promote intra trade, foreign direct investment, tourism and development financing which is at a low level.

“It is our hope, therefore, that with the establishment of African Continental Free Trade Area (AfCFTA) which is His Excellency’s initiative which Ghana is lucky to hosting the Secretariat, things will improve as very much expected. Here too, we shall do our best to support the process,” he added.