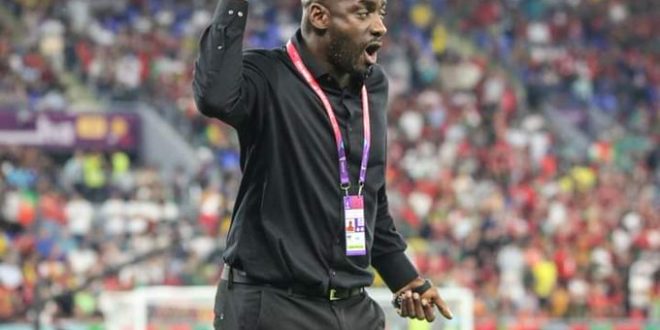 Head coach of the Black Stars, Otto Addo, has revealed that the hunger of the players to play and succeed ahead of their next World Cup match in Qatar, is making it difficult for him to make decisions.

Addressing a pre-match presser ahead of the team’s Group H game against South Korea, he stressed that Ghanaians will see a more ‘passionate’ Black Stars.

He however disclosed that the enthusiasm of his troops is making it difficult for him to finalise his decisions.

“We will see a passionate team against South Korea. We will see this same passion they showed the last game. Everybody is hungry to play and training [well], making it difficult for me to make decisions”, Otto Addo said.

According to some critics, the team lost their opening Group H game because they were overwhelmed by the calibre of the Portuguese, forcing them to coil into their shells.

But reacting to these concerns, the Black Stars trainer stated in a presser on Sunday that his boys played without any intimidation.

According to him, even though the squad had some inexperienced legs, it did not affect their confidence against the star-studded Portuguese side.

Responding to a question from JoyNews‘ Gary Al-Smith, he said, “I don’t think it’s true. Our players did so well. I don’t think we over respected them”.

He continued, “For me, we showed that we could compete with them, even though we had a lot of inexperienced players.

Some even had their debuts in the last game against Switzerland, but they performed”.

In a match that saw what has been widely described as ‘unfair officiating’, the Black Stars lost by three goals to two against the Portuguese last Thursday, November 24.

After a goalless first half, the Portuguese drew first blood after Ronaldo converted a controversial penalty in the 65th minute.

The lead was soon canceled by Ghanaian skipper, André Dede Ayew in the 73rd minute, after tapping home from a pass by Ajax midfielder, Mohammed Kudus.

But the Portuguese took the lead again and deepened their dominance with goals from João Félix and Rafael Leão in the 78th and 80th minute respectively.

The Stars managed to close the gap with an 89th minute strike from substitute, Osman Bukari, heading home a cross from former Chelsea defender, Baba Rahman.

However, this was not enough to stop the team from conceding their first defeat in the tournament.

The team is therefore poised to make amends in their next match against South Korea, Otto Addo said.

Addressing the press, he said his charges are fired up for their second game in Qatar.

He said Ghanaians will see a passionate Black Stars team against South Korea on Monday.