Breaking News
Home / GENERAL NEWS / It Is Not By Force To Serve Us; Just Go – Bolgatanga Central MP To Ken Ofori-Atta 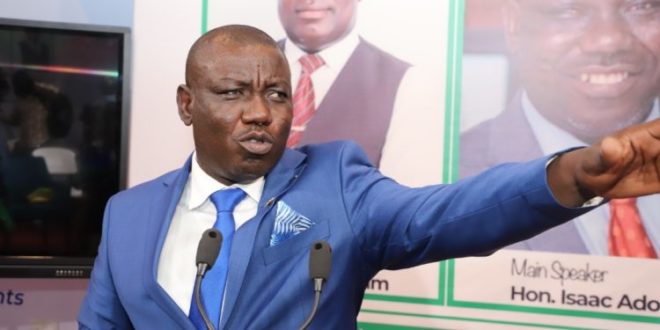 The National Democratic Congress (NDC) Member of Parliament for Bolgatanga Central, Isaac Adongo has asked the Finance Minister, Ken Ofori-Atta, to humbly resign and allow someone with fresh ideas to take over.

Contributing to the debate on the report by the ad-hoc committee of Parliament that probed allegations against the Finance Minister on Thursday, Mr Adongo said the majority of Ghanaians do not want Mr Ofori-Atta to continue as the Finance Minister and called on NPP MPs to ensure that the Minister is removed from office.

“We voted for you, and we are saying we don’t want you anymore, it is not by force to serve us, just go,” the tough-talking MP said on the Floor of Parliament on Thursday, December 8, 2022.

He added that the evidence against Mr Ofori-Atta is incontrovertible and demands that Parliament does the honourable thing to remove the Finance Minister from his position.

Dr. Dominic Ayine, a co-Chairman of the ad-hoc committee also claimed that unassailable evidence of misconduct was established against Ken Ofori-Atta.

Delivering his remarks on the floor of Parliament on Thursday, the Bolgatanga East Member of Parliament called for a secret ballot to determine the fate of the Finance Minister.

According to him, even though Mr Ofori-Atta was exonerated on some allegations levelled against him, evidence discovered during the committee hearing is enough for the Minister to be removed.

A co-chairman of the committee, K.T Hammond, however, disagreed with his colleague stating that no findings or recommendations were made against the Finance Minister.

I'm Adwenpa-Hene |Blogger & Broadcaster Journalist. I am the CEO and manager of this noble website. I publish on Entertainment, Sports, Politics, Lifestyle, and Technology. You can also follow Us on : YouTube Channel - My Ghana Media TV, Facebook - MyghanaMedia TV , Twitter - @MyGhanamedia2 & Instagram - My Ghana Media TV. Email Address: [email protected] Contact Us: 0200818719
@@MyGhanamedia2
Previous Bank of Ghana Reacts To Reports Of Fire Outbreak At Its Premises
Next George Opare Addo Must Lead NDC Youth Else ………… – E/R NDC Youth Wing