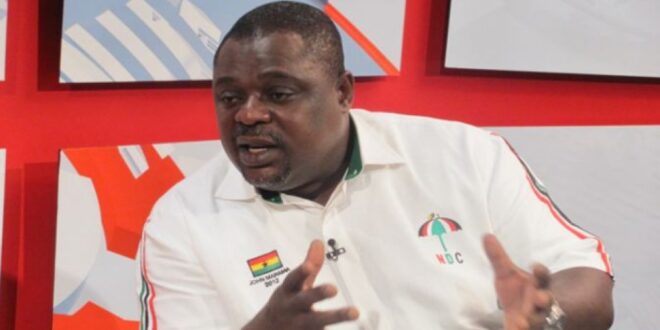 Nketiah is hoping to unseat the incumbent national chairman Samuel Ofosu-Ampofo in the upcoming delegates’ congress of the party this Saturday (17 December), but Anyidoho said a win for his former boss will be detrimental to the Umbrella Family.

Appearing on The Asaase Breakfast Show on Tuesday (13 December), Anyidoho said the NDC risks losing the 2024 election if Nketiah wins.

“I have said it, if NDC delegates make a mistake and for any reason Asiedu Nketiah becomes chairman of NDC, let’s forget about 2024 elections. We won’t win,” Anyidoho said.

“The revolution has already started in Cape Coast, and I am telling you that one person who is leaving office is Johnson Asiedu Nketiah; he has outlived his usefulness and he will leave office.”

“In Cape Coast some people took money, but I thank the women and youth within our rank and file for still holding fast to their beliefs and acting accordingly,” Anyidoho said.

Listen to Koku Anyidoho in the attached video clip:

What happened in Cape Coast

Dr Louisa Hannah Bissiw and Opare Addo were re-elected as the national women’s and youth organisers of the NDC respectively.

Bissiw polled 433 out of the valid votes cast to beat her opponent Margaret Ansei, who garnered 362 votes at the at 10th youth and women’s conference held on Saturday at the University of Cape Coast.

Meanwhile, Opare Addo retained his position by beating his sole contender Brogya Genfi. He obtained 533 votes against the latter’s 508 votes.

This year’s conference was on the theme: “Rallying for victory 2024, Ghana’s hope.”

The party holds its main conference on 17 December at the Accra Sports Stadium to elect other national executives including national chairman and general secretary.